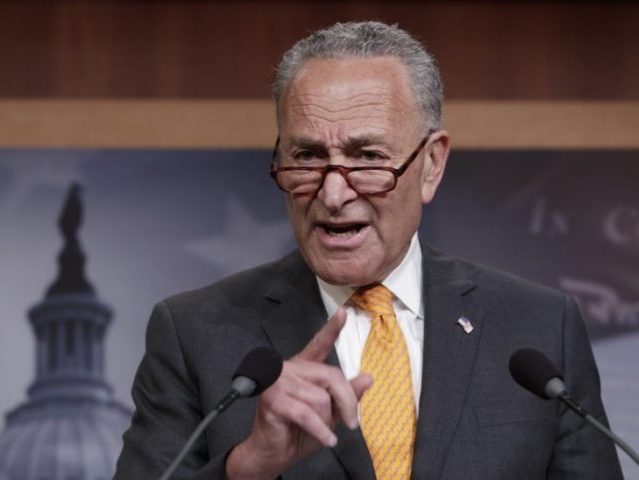 Senate Minority Leader Sen. Chuck Schumer (D-NY) on Tuesday sent a letter to Justice Department inspector general Michael Horowitz to request an investigation into “whether any potentially unlawful or improper communications have occurred between Acting Attorney General Matthew Whitaker, the White House, and other entities.”

NEW: Sen. Chuck Schumer calls on DOJ inspector general to “conduct an investigation of whether any potentially unlawful or improper communications have occurred between Acting Attorney General Matthew Whitaker, the White House, and other entities.” https://t.co/5BdbXeZWMa pic.twitter.com/9dk5ZbC9qt

They argue that undermines the Constitution’s demand that the president only appoint top officials with the “advice and consent” of the Senate.

“The U.S. Senate has not consented to Mr. Whitaker serving in any office within the federal government, let alone the highest office of the DOJ,” the senators said.

For Blumenthal, it’s his third major lawsuit against Mr. Trump and the administration, following previous complaints over the president’s business empire and the Constitution’s emoluments clauses, and another over the way documents were handled during the confirmation of Supreme Court Justice Brett M. Kavanaugh.

In the case of Whitaker, he was serving as chief of staff when Attorney General Jeff Sessions was ousted the day after the midterm elections.

In their lawsuit, the senators say if they’d had a chance to vet Whitaker, they would have prodded him on his views on the special counsel.

The Justice Department’s Office of Legal Counsel, the government’s chief internal voice for legal matters, has opined that the Whitaker appointment is both legal and constitutional. “As all three branches of government have long recognized, the President may designate an acting official to perform the duties of a vacant principal office, including a Cabinet office, even when the acting official has not been confirmed by the Senate,” the opinion read.