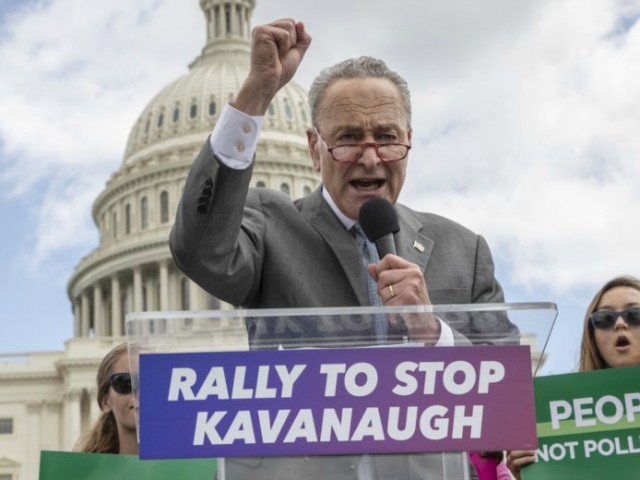 The Post released a story Sunday that revealed Christine Blasey Ford, a California psychology professor, is the person accusing Kavanaugh of a “rape attempt” in the 1980’s.

In the piece, Ford described her alleged encounter with Kavanaugh back when they both were still in high school, in which she now accuses Kavanaugh of pinning her to a bed in 1982 and attempting to force himself on her.

In the wake of the accusation, Schumer called for a postponement of the Senate confirmation vote for the “serious and credible allegation” to be “thoroughly investigated.”

“For too long, when woman have made serious allegations of abuse, they have been ignored. That cannot happen in this case,” Schumer said.

“Judge Kavanaugh’s credibility has already been seriously questioned because of his answers regarding Manny Miranda, Judge Pryor, and other issues during his time in the Bush White House, and now his credibility is even more suspect,” Schumer said.

“To railroad a vote now would be an insult to the women of American and the integrity of the Supreme Court,” Schumer contended.

SCHUMER: “Senator Grassley must postpone the vote until, at a very minimum, these serious and credible allegations are thoroughly investigated.” pic.twitter.com/3P8tpaCzui

Kavanaugh emphatically denied the allegations, which were reported last week after Sen. Dianne Feinstein (D-CA) referred to the Federal Bureau of Investigation (FBI) regarding the allegations.

He continues to deny the accusations brought against him. Judge Kavanaugh said in a statement on Sunday, “I categorically and unequivocally deny this allegation. I did not do this back in high school or at any time.”

Raj Shah, White House principal deputy press secretary, said in a statement on Sunday, “As the [Post] story notes, we are standing with Judge Kavanaugh’s denials.”

The Senate Judiciary Committee also backed Kavanaugh in a statement on Sunday, saying, “It’s disturbing that these uncorroborated alelgations from more than 35 years ago, during high school, would surface on the eve of a committee vote after Democrats sat on them since July.”

“If Ranking Member Feinstein and other Committee Democrats took this claim seriously, they should have brought it to the full Committee’s attention much earlier,” the Judiciary Committee said.

Sen. Kamala Harris (D-CA), a member of the Senate Judiciary Committee, called for Kavanaugh’s confirmation vote to also be delayed to give the Senate more time to investigate the “credible and serious allegation.”

“The Senate has a constitutional responsibility to scrutinize SCOTUS nominees,” Harris said. “A vote on Kavanaugh’s nomination must be delayed until there is a thorough investigation.”

Christine Blasey Ford courageously stepped forward to tell her story — it is a credible and serious allegation. The Senate has a constitutional responsibility to scrutinize SCOTUS nominees. A vote on Kavanaugh’s nomination must be delayed until there is a thorough investigation.

Sen. Kirsten Gillibrand (D-NY) said in a tweet on Sunday regarding the new Post story, “this should disturb every member of the U.S. Senate.”

This should disturb every member of the U.S. Senate. https://t.co/r5QVKEGmr8

Not all Democrats have called for a delay of Kavanaugh’s confirmation vote.

Sen. Doug Jones (D-AL) said on CNN’s “State of the Union” on Sunday that he predicted that Kavanaugh’s nomination will go forward despite the accusation.

However, Jones’ statement was before Ford came out as Kavanaugh’s accuser.

The Alabama Democrat described the situation as “very difficult” and said he wished it had been brought up earlier in the confirmation process.

“I think at this late date, we’re going to have to wait and see if this person decides to come forward to test that in the light of day,” Sen. Jones said.