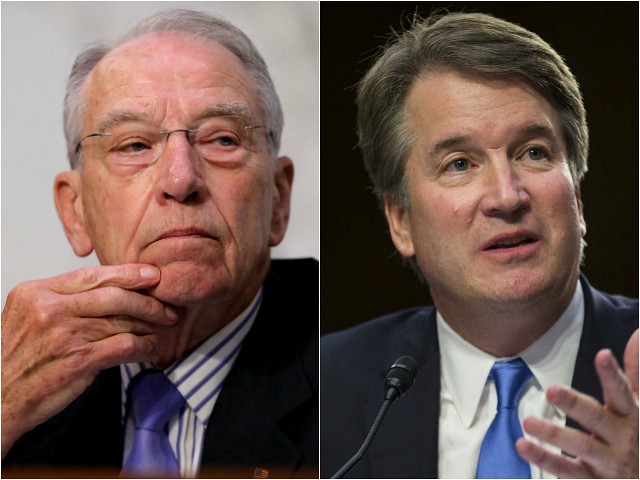 Senate Judiciary Chairman Chuck Grassley (R-IA) said in a statement on Thursday that the FBI report on Supreme Court Justice nominee Judge Brett Kavanaugh has revealed “no hint” of sexual misconduct and that “it’s time to vote” to confirm the nominee.

Sen. Grassley, who has led the confirmation of Judge Kavanaugh, released a statement after he read the FBI report which investigated the accusations that Kavanaugh engaged in sexual misconduct against Christine Blasey Ford.

GRASSLEY: “There’s nothing in it that we didn’t already know… It’s time to vote. I’ll be voting to confirm Judge Kavanaugh.” pic.twitter.com/h1zUeIDP3F

Grassley said regarding the FBI report:

There’s nothing in it that we didn’t already know. These uncorroborated accusations have been unequivocally and repeatedly rejected by Judge Kavanaugh, and neither the Judiciary Committee nor the FBI could locate any third parties who can attest to any of the allegations. There’s also no contemporaneous evidence. This investigation found no hint of misconduct and the same is true of the six prior FBI background investigations conducted during Judge Kavanagh’s 25 years of public service. [Emphasis added.]

In contrast to the allegations laid against Kavanaugh, Grassley said that many of the nominee’s friend and colleagues can only attest to Kavanaugh’s good nature.

“Here is what we know: Judge Kavanaugh’s former clerks, colleagues, and friends from high school to the present acclaim his personal integrity and character. His neighbors and community members recognize his positive contributions to their schools and churches,” Grassley said. “And his fellow members of the legal profession know him to be a thoughtful and respectful jurist. His juridical record shows that he is fair and rules impartially and without prejudice.”

The Senate Judiciary Chairman said that now the FBI investigation cleared the accusations against Kavanaugh despite the Senate Democrats’ tactics to disrupt the nomination process, senators “ought to wipe away the muck from all the mudslinging and politics and look at this nomination with clear eyes.”

“He’s served with distinction for twelve years on the nation’s most important circuit court and dedicated himself to serving the American public,” the Iowa senator said. “We know that he will be an excellent justice because he’s been an excellent judge.”

The FBI report was the last hurdle for reluctant Senate Republicans such as Sens. Jeff Flake (R-AZ), Susan Collins (R-ME), and Lisa Murkowski (R-AK), who insisted on a week-long FBI investigation before they signal if they will support the president’s nominee.

Now senators can have the chance to read the FBI report and decide if they plan to vote to confirm the president’s nominee.

Senate Majority Leader Mitch McConnell (R-KY) filed the motion to cloture late Wednesday night, which would allow the Senate to vote to confirm Kavanaugh on Saturday.

Chairman Grassley concluded that the Senate needs to take action on Kavanaugh.