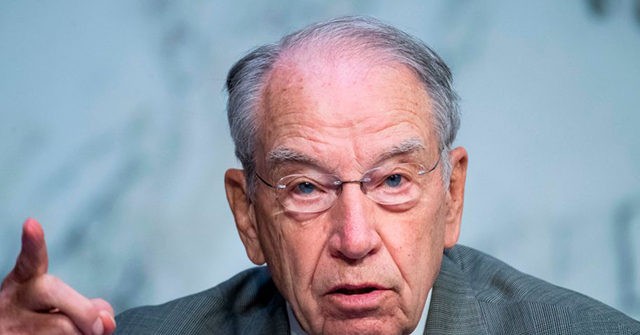 Sen. Chuck Grassley (R-IA) rushed to the defense of his colleague Sen. Dianne Feinstein (D-CA) on Wednesday after leftists attacked the ranking member of the Senate Judiciary Committee over her handling of Judge Amy Coney Barrett’s confirmation hearing, accusing her critics of being driven by “sexist” and “ageist” motivations.

“Democrats calling for Senator Feinstein to step down from Judiciary Ranking Member should think twice abt their sexist & ageist motivations against an outstanding legislator & icon in her own right,” Grassley said, calling the attacks “totally unjustified”:

The 87-year-old lawmaker has faced a wave of criticism from Democrats following her handling of last week’s confirmation hearing of President Trump’s Supreme Court nominee, Judge Barrett. While she grilled Barrett on questions on abortion and declared that a Justice Barrett would “vote to strip millions of Americans of their health care,” she admitted that the nominee impressed her with her explanation of severability and Obamacare, drawing ire from Democrats.

Feinstein ultimately described the hearing as “one of the best set of hearings that I’ve participated in.”

“It leaves one with a lot of hopes, a lot of questions and even some ideas perhaps of good bipartisan legislation we can put together,” she added.

Her positive attitude enraged fellow Democrats. The Washington Post was among the first to lead the charge on the critiques, even highlighting a hug she shared with chairman Sen. Lindsey Graham (R-SC):

Feinstein also thanked the committee’s chair, Sen. Lindsey O. Graham (R-S.C.), and then walked across the room to wrap him in a hug. Never mind that neither senator was wearing a face mask. Many Democrats were so much more incensed about what that hug symbolized — a final white flag, a compliment for Graham after a comparatively tame week of questioning — that, hours later, at least two liberal activist groups called for Feinstein to go.

Other Democrats joined in the call for Feinstein’s removal from the Judiciary Committee.

Senate Minority Leader Chuck Schumer (D-NY) has failed to jump to Feinstein’s defense in the same manner as Grassley and would not say if he has plans to make any changes to the Judiciary Committee.

“I’ve had a long and serious talk with Sen. Feinstein,” Schumer told reporters. “That’s all I’m going to say about it right now.”