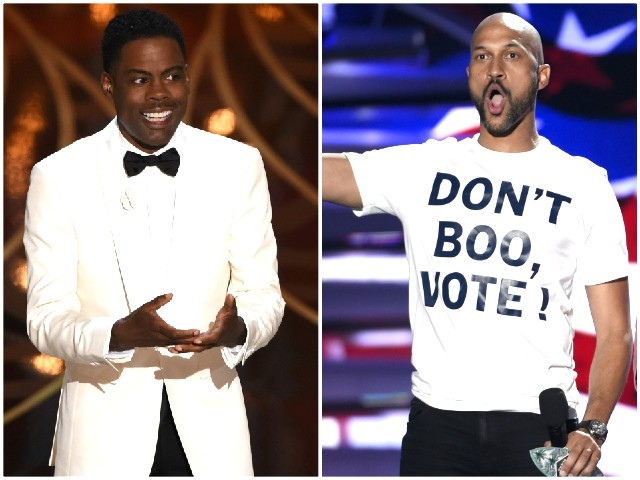 Actors Chris Rock and Keegan-Michael Key star in a get out the vote ad claiming that black voters are being “disenfranchised.” The stars offer black voters advice on what to do if they are turned away at their polling place.

“They can’t tell you you can’t vote,” Key yells at the camera. “You have a right to ask for a provisional ballot.

The pair ends the spot saying in unison that blacks should tell poll workers, “Give me a provisional ballot with a receipt as required by law when requested.”

The last message on the screen is “Don’t let them silence you.”

Watch @KeeganMKey and @chrisrock explain what to do if someone tries to stop you from voting (with @ColorofChange) pic.twitter.com/kGka11kOci

The Now This ad was created for the far-left advocacy group Color of Change.

Even though the pair claim that voter suppression is occurring “across America right now,” the ad is presumably in response to efforts in Georgia to correct the voter rolls by eliminating thousands of improper voter registrations.

Georgia’s Republican Secretary of State’s office has set about to dump over 50,000 names from the voter rolls. Most of the names are those of people who have passed away, people who moved out of state, or people who are registered in more than one district. But liberals claim that the culling hits black voters harder than others and that it is an attempt to prevent black people from voting.

No one is being prevented from voting, even if their name does not appear on a registration list.

Many of the disputed registrations are a result of mismatched information — such as names on driver’s licenses spelled differently than names on voter rolls. And by law, this discrepancy is up to the voter to clear up, not the state.

Finally, others on the list were purged because the person had not bothered to vote in the last few election cycles. Advocacy groups say this criteria is racist.

Contrary to the loud proclamations by Chris Rock and Keegan Michael Key, the actual evidence appears to show that there has been no effort to suppress the black vote in Georgia.