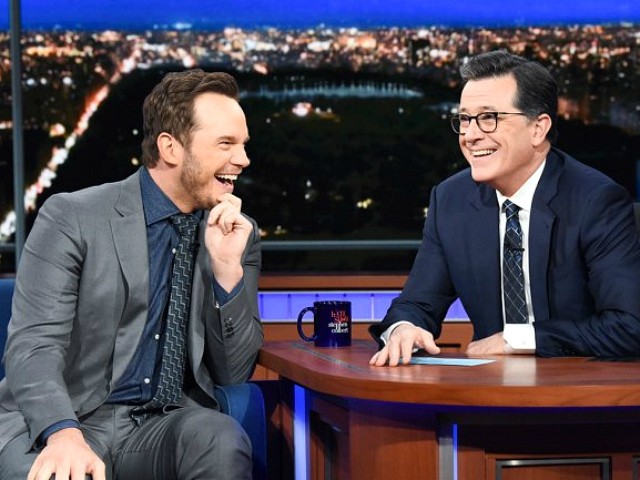 Pratt said that he had just come off the diet, a regimen he was encouraged to try by the pastor at his Christian church.

Speaking of the biblical figure of Daniel, Pratt said: “He’s a guy who only ate fruits and vegetables and cereals. He didn’t have any leavened bread or any animal products.”

“I was inspired by my pastor to do it. It’s kind of like our Lent, you know, you give something up.”

“So, for 21 days I had no meat, no sugar, no alcohol, and it was actually amazing. It was really cool,” the Avengers star said.

Responding to the applause of the audience, Pratt added with a smile, “If you know how much I drink, you know that 21 days…!”

Asked tongue-in-cheek by Mr. Colbert whether any lion-fighting is involved, since the prophet Daniel is known for having escaped from a lion’s den, Pratt replied: “Lion-fighting is sick cardio.”

“Do you ever feel like you’re in the lion’s den, being a celebrity in the public eye?” Colbert asked.

“There’s this great quote I heard in church,” Pratt said, “and it felt really appropriate, which was ‘If the spotlight that’s shining on you is brighter than the light that comes from within you, it will kill you.’ And you see it all the time.”

Among Hollywood actors, Chris Pratt stands out for his unapologetic Christian beliefs, something he is proud of.

Last June, Pratt told his millennial audience that “God is real” while accepting the Generation Award at the MTV Movie and TV Awards. He challenged the young people to take care of their “soul” as part of his “Nine rules from Chris Pratt.”

As his rule number six, Pratt said: “God is real. God loves you. God wants the best for you. Believe that. I do.”

For number eight, he said: “Learn to pray. It’s easy and it’s so good for your soul.”

Pratt’s Christianity has come to define him, something his fans seem to love about him.

It is “authentic for me to be pro-Christian, pro-Jesus,” the Jurassic Park star told the Associated Press (AP) last September. “That’s my thing. I like it.”