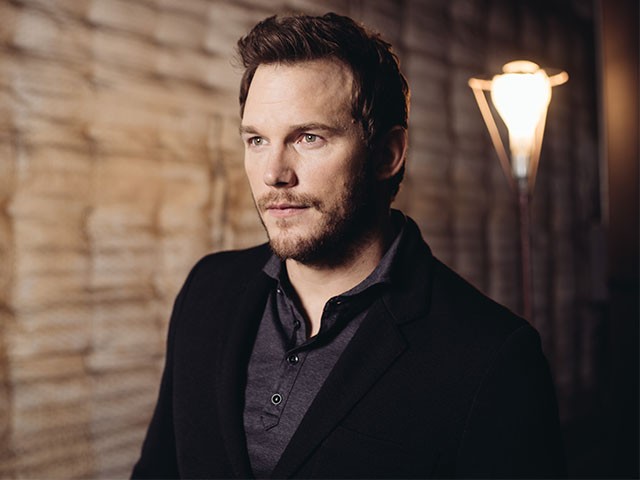 LOS ANGELES (AP) — When Chris Pratt is running his fastest, he has a tendency to fall.

The “Guardians of the Galaxy” and “Jurassic World” star broke a femur growth plate as a kid, leaving him less than confident in his sprinting abilities — and a bit self-conscious about some action scenes.

“My leg grew in a little funny. So when I run, I run a little crooked. And if I run at top speed, there’s a high likelihood I will fall down,” he said. “My high school football highlight tape was all just images of me falling down midfield, like I just tripped over my shoe laces or something. So that’s always a little bit of a concern for me.”

Pratt discussed running in an interview with The Associated Press after meeting at a bar with seven athletes with disabilities, part of the nonprofit group Achilles International. He surprised them with the news that they’re being sponsored by Michelob Ultra to run in the New York City Marathon. The 39-year-old actor, a spokesman for the beer brand, talked to AP about his passion for fitness, his religion, and his admiration for Tom Cruise. The following remarks have been edited for clarity and brevity.

AP: What do you get out of meeting people like this?

Pratt: Fitness is a lifestyle. And I think it’s a great common denominator. So you can sit me down with anybody if they have that portion of their life. We always have something in common. That makes this brand a good fit for me and makes this type of experience with Achilles International a really good fit for me. It’s hard enough to do a marathon or to do a triathlon. But to do it when you have physical limitations and disabilities, it’s pretty awe-inspiring.

AP: What the fitness routine when you’re at the farm?

Pratt: At the farm (Pratt’s property in the San Juan Islands off the coast of Washington state), there is actually a fitness club in town. So I go there. But I do a lot of biking and running there, and ocean swimming. … For me, it really clears my mind. Sound body, sound mind. I’m an actor so I don’t have that kind of job I can just shut my mind off and do physical labor. I think that’s what I was probably genetically made for, you know? I should be moving refrigerators or something. But now I’m doing a job that really isn’t that physically demanding. So having something that I can just shut my mind off and do physically every day is good for me.

AP: Running on screen, who is your top person for that?

Pratt: Oh, Tom Cruise. ‘Mission: Impossible’ — he ran across London, across bridges, over buildings. Yeah, Tom is a great runner. He did all his own jumping, he was flying the helicopter, he really was like — oh, if there’s a question of whether or not I’m the best at this, let me put that question to bed. He’s the best.

AP: Is that a career goal, to be able to be doing that kind of thing when you’re 50-plus?

Pratt: One of the career goals that I have based on Tom Cruise is his reputation as being a really nice, positive guy who works hard. I’ve never actually met him, but I would like — if you’re going to leave a legacy, it’d be nice to have it be that people thought you were nice and easy to work with and you worked hard. I think that’s pretty cool.

AP: At recent awards show appearances, you went out on stage and talked publicly about your faith. Is it an especially important time to do that?

Pratt: I don’t know that I am so much more motivated by where the world is or if it’s just what I’m feeling called to do right now. I think it’s a combination of both things. … That kind of a message, it might not be for everybody. But there is a group of people for whom that message is designed. And nothing fills my soul more than to think that maybe some kid watching that would say, ‘Hey, I’ve been thinking about that. I’ve been thinking about praying. Let me try that out.’ That’s like the only way I feel like I can repay what has essentially been a giant gift in my life.

AP: Does it feel like a risk sometimes in Hollywood?

Pratt: No, not at all. … I think that there’s this narrative that exists out there that Hollywood is anti-Christian or anti-religious, but it’s just not the case. They are kind of not anti-anything. They are kind of pro whatever is authentic to you. And I like that. Because it’s authentic for me to be pro-Christian, pro-Jesus. That’s my thing. I like it. And I’ve never had anyone try to shame me, to my face. Maybe they go say it behind my back. But if that’s the case, go ahead. You can say whatever you want about me – to my face or behind my back. I’m not going to change.