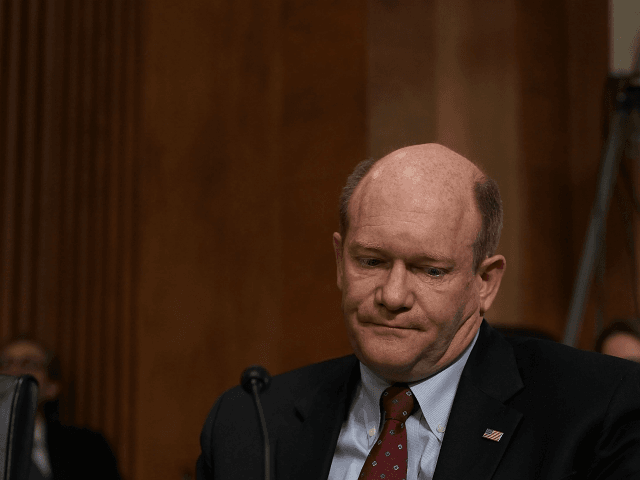 .@JeffFlake is a YES on Kavanaugh.@SunlenSerfaty broke that news to Sen. Coons in the hallway as he walked into the hearing.

Coons said, “Oh f—k,” then choked up, “We each make choices for our own reason. I’m struggling, sorry.”

Coons, described as a close friend of Flake, wrote in a 2017 October New York Times opinion-editorial that Flake’s departure from the Senate should “scare Democrats,” describing him as one of the few Republicans “willingness to speak out against his party’s current standard-bearer.”

Earlier, Flake’s office released a statement announcing the Arizona lawmaker’s support for Kavanaugh. “After hearing more than 30 hours of testimony from Judge Kavanaugh earlier this month, I was prepared to support his nomination based on his view of the law and his record as a judge,” Flake said in a statement. “In fact, I commented at the time that had he been nominated in another era, he would have likely received 90+ votes.”

Prior to the Senate Judiciary Committee’s Friday meeting, protesters confronted Flake and a staffer in a Senate elevator.  “I told the story of my sexual assault. I told it because I recognized the story that she is telling the truth,” the woman said to Flake. “What you are doing is allowing someone who actually violating a woman to sit on the Supreme Court. This is not tolerable,” one protester said. “I have two children. I cannot imagine that for the next 40 years they will have to have someone in the Supreme Court who has been accused of violating a young girl. What are you doing, sir?”

Women confront Sen. Jeff Flake after he says he’ll vote yes to Kavanuagh: “That’s what you’re telling all women in America, that they don’t matter. They should just keep it to themselves because if they have told the truth you’re just going to help that man to power anyway.” pic.twitter.com/T7fSpyT69E

“You’re telling all women that they don’t matter, that they should just stay quiet because if they tell you what happened to them you are going to ignore them,” another protester, near tears, said to the Arizona lawmaker. “That’s what you’re telling me when you vote for him. Don’t look away from me.”