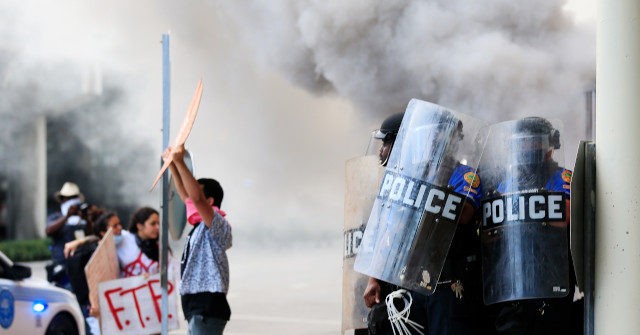 Christie replied, “I would tell him first, in this instance with that kind of thing, not to overreact, but to work with the governors. His interests and the governors’ interests are aligned here. I think that the government of Minnesota was simply asleep at the switch.”

Gov. Tim Walz (D-MN) lacked experience and judgment, assessed Christie, describing the Minnesota governor as having committed “absolute malpractice” in his mishandling of riots in his state.

Christie added, “What we need in this instance from a law enforcement perspective is not overwhelming force, [but] overwhelming presence. We need those people who are agitators to understand that they are significantly outnumbered than those who are enforcing the law and that to try to agitate something would just be foolhardy.”

“I don’t think we’re to the point yet where we need to put active-duty military as opposed to National Guard in the street,” Christie estimated. “That would be a really really significant step and one that we don’t necessarily need to do.

Christie concluded, “Having command of the National Guard in New Jersey, we would certainly have had the resources to be able to handle something like this, and I think it’s just about the governors doing the right thing.