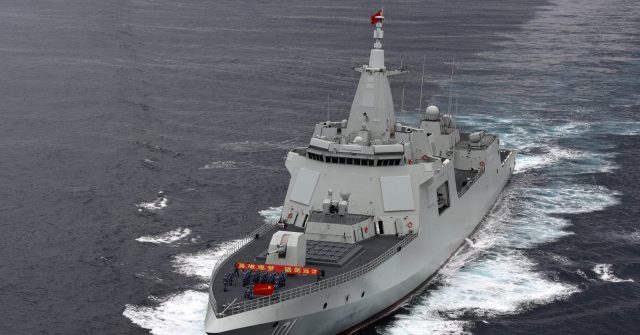 Japan’s government said this week it spotted three Chinese warships “sailing an unusual route around the archipelago,” the South China Morning Post (SCMP) reported on Wednesday, noting that the sighting comes amid heightened tensions between Tokyo and Beijing over maritime territorial disputes.

“Japan’s defence ministry said two Chinese guided-missile destroyers and a supply ship had on Monday [June 20] sailed southwest through an area to the southeast of Chiba prefecture,” the Hong Kong-based SCMP relayed, citing an original report by Japan’s Kyodo News.

“They had reportedly entered the Sea of Japan from the Tsushima Strait, then headed into the Pacific Ocean via waters near Hokkaido last week. The warships then sailed through waters east of Miyagi county on Sunday [June 19] and appeared to be circumnavigating the Japanese archipelago,” according to the report.

China’s state-run Global Times confirmed on June 21 that China’s Navy deployed a fleet of warships to sail around the Japanese archipelago in recent days.

Led by the Type 055 large destroyer Lhasa, a Chinese People’s Liberation Army (PLA) Navy flotilla reportedly sailed from northwest to the east and south sides of Japan on Monday [June 20] and Tuesday [June 21] after making transits in three strategic straits near the island country, and the vessels are expected to make a full circle around Japan if they are to continue in their path and return to base.

China’s naval exercises near Japan come amid renewed friction between the two sides over Beijing’s recent gas field exploration in an area of the East China Sea near Japan that is disputed by both sides. Japan’s Ministry of Foreign Affairs said on June 20 that it had “confirmed that China set up a new drilling facility for gas fields on the west side of a Tokyo-proposed median line separating the two nations’ exclusive economic zones in the [East China] sea,” Kyodo News reported on June 23.

Tokyo fears that Beijing’s unchecked activities in the disputed area may lead to China extracting underground resources from beneath Japan’s side of an unofficial boundary separating the territory between the two nations.

Senior diplomats representing China and Japan held a teleconference on June 23 to discuss the gas field exploration, with Tokyo conveying “strong concern” to Beijing over the matter, Kyodo News reported. The two sides reportedly “agreed to keep communicating toward the implementation of the 2008 bilateral agreement on joint gas development in the area” during the talks, according to Japan’s Foreign Ministry said.

Negotiations to delineate an official boundary between Japan and China in the contested area of the East China Sea have stalled for over a decade. The 2008 bilateral agreement referred to by Japan’s government on June 23 states that “both sides will, through joint exploration, select sites for joint development by mutual agreement and conduct joint development at the sites based on the principle of mutual benefit.”

The unofficial agreement concerns petroleum resources from an established, off-shore oil and gas field in the region, which is near the similarly disputed Senkaku Islands. Japan administers the uninhabited islets while China claims them as its own territory due to their strategic location near natural resource stores and the sovereign island nation of Taiwan, which is also claimed by Beijing.