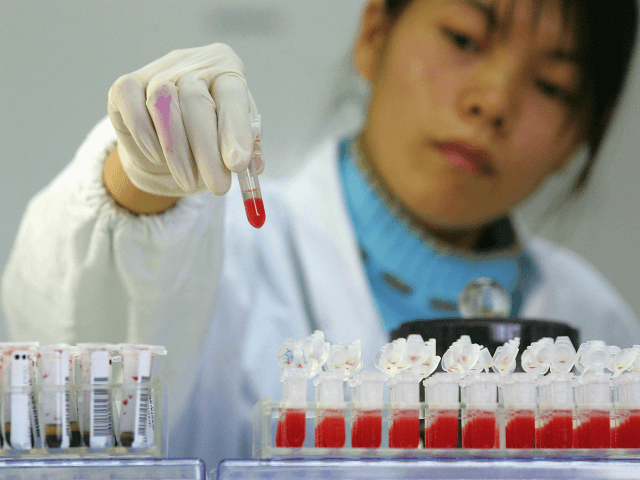 The Communist Party of China faced yet another healthcare scandal Tuesday following the revelation that one of the country’s largest state-run pharmaceutical companies had found HIV present in an estimated 12,000 doses of immunoglobulin treatment.

Shanghai Xinxing Pharmaceutical Company, owned by the Chinese communist regime, notified authorities of the finding Tuesday and, according to the National Health Commission, immediately began working to remove the treatments from potential circulation.

The HIV contamination is the latest in a string of failures on the part of the Chinese healthcare system, most prominently the deliberate use of expired vaccines on Chinese children to save money, that Beijing has had to apologize for. Communist Party chief Xi Jinping already faces significant backlash from angry parents over the vaccine scandal, including protests in which parents have surrounded and beaten Communist Party officials in public.

Shanghai Xinxing’s contamination news comes just two weeks after the nation’s State Administration for Market Regulation announced a new campaign to fight the “rampant irregularities” in China’s healthcare system. As a communist state, the Chinese government promises free, functional healthcare to its people, a promise it appears increasingly unable to fulfill under Xi.

The Chinese government statement, published Wednesday, stated that Xinxing “immediately notified the State Food and Drug Administration and requested the medical institutions across the country to suspend the use” of the blood plasma treatments affected. While 12,000 batches of the treatments are known to carry HIV, the government statement appeared to leave open the possibility that more may soon be found, as Xinxing reportedly urged government medical officials to “continuously observe and monitor” patients who had received the treatment.

The South China Morning Post translated a statement from the Jiangxi Provincial Disease Control Centre, which administers the region where Xinxing is operational, in local news asserting that no patients who had received the treatment had tested positive for HIV.

Neither government officials nor individuals affiliated with the state-run medical enterprise have revealed how the HIV became present in the treatments.

The scandal follows a stern declaration from the Chinese government’s State Administration for Market Regulation that the Communist Party would finally take serious action against “irregularities” in the nation’s medical industry. Officials have strived to keep the blame for medical negligence on the alleged “private” section in China, though even enterprises owned by individuals typically fall into the hands of loyal supporters of the Party.

“Recently, serious problems involving the health products market have been exposed, such as fake promotions, illegal advertising and deceiving consumers,”

Zhang Mao, the Market Regulation minister, said in the state-run China Daily newspaper last month, promising a sweeping government effort to shut these down. Zhang mentioned not just the use of faulty medical supplies to save money or recalls for dangerous health products, but the use of pyramid scheme promotions on the part of holistic and nature-based medical treatment vendors. The latter caused outrage in China last month after

“With the ongoing investigation into Quanjian for alleged false advertising and illegal pyramid-selling, the chaos in China’s healthcare products industry has grasped the public’s attention,” a column in the government-run Global Times noted in mid-January, demanding more government regulation. “There are lots of Quanjian-like companies, big or small, that cheat consumers with their misleading advertising in China’s tangled healthcare products market. … [I]t is urgent for the relevant government departments to rectify irregularities and ensure close supervision of the industry.”

While the Communist Party has successfully convinced many that private industry is to blame for natural remedy scams, it has had a much harder time convincing Chinese parents that the government played little role in the distribution of expired and faulty vaccines to their children. Multiple companies revealed in 2018 that they had found employees administering allegedly harmless but ineffective vaccines to children throughout the country. By August, the tally of faulty administered vaccines reached nearly one million, meaning that nearly one million Chinese children were effectively unvaccinated for diseases like polio and measles.

The regime initially displayed patience with outraged parents, but soon began censoring protests on social media, deleting posts with the word “vaccine” in them and targeting particularly vocal objectors. The protests continued, however. Last month, an angry mob of parents surrounded government officials at a health center in Jiangsu province and, shouting “Beat him! Beat him!”, assaulted the official in public.