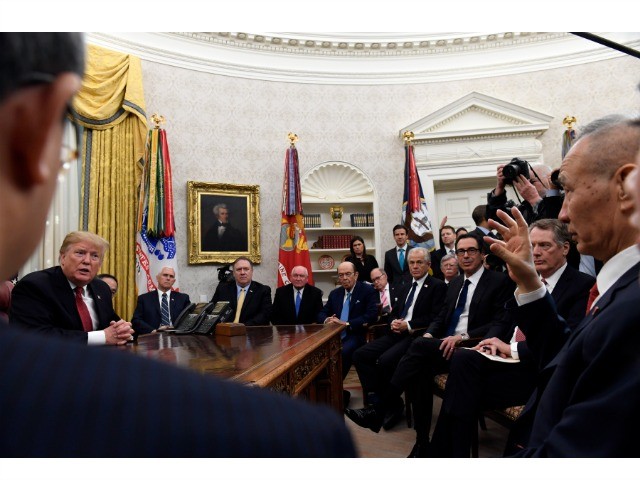 China and the U.S. are at a “critically important stage” in their relations, according to a letter from the President of China to President Donald Trump, which was read aloud in the Oval Office Thursday.

A Chinese trade delegation led by Vice Premier Liu He has been meeting with U.S. counterparts over Wednesday and Thursday in Washington, DC, during 90-days of intensive negotiations.

Chinese President Xi Jinping and president Trump met last at the G20 Argentina summit, and on Thursday a letter from Xi to Trump was read aloud to President Trump in the Oval Office with the vice premier present.

“Right now China-U.S. relations are at a critically important stage,” Xi’s message read, in part. The letter spoke of the period of intense trade negotiations between the two nations.

“I hope our two sides will continue acting in a spirit of mutual respect” and cooperation through meeting halfway and meet an agreement in the interest of both sides. Xi wrote that this would be a signal to both nations and the “broader international community.”

Xi’s letter acknowledged that president Trump had pushed for China to purchase more U.S. agricultural products. Xi wrote, “I have made some arrangements about which I believe might have been good.”

President Xi expressed he has enjoyed his conversations with president Trump. “Mr. President if there is anything, you could always approach me through various means,” wrote Xi. “I hope we’ll keep close contact in various ways.”

He spoke of the Chinese lunar new year and wished president Trump and his family a “may you enjoy a happy and prosperous new year.”