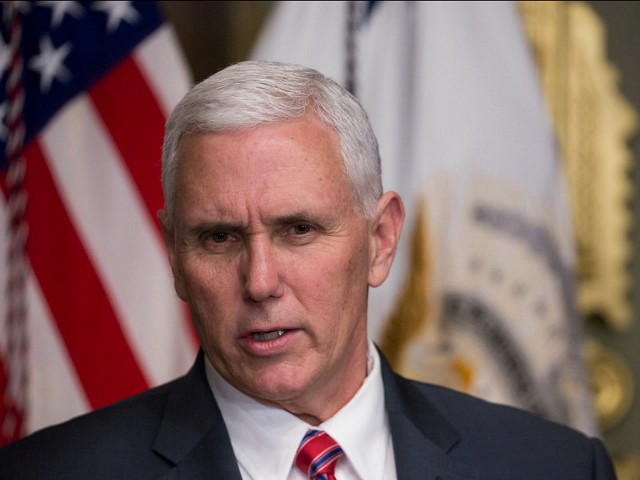 China’s state-run Global Times vowed over the weekend to fight back against “insults” from U.S. Vice President Mike Pence and promised a “new Cold War” if the Trump administration forces the issue by continuing to produce “hostile reports and speeches.”

The Global Times took a passive-aggressive approach in an editorial on Sunday, beginning with strong criticism of Pence’s speech at the Hudson Institute last Thursday and citing observers who compared it to Sir Winston Churchill’s “Iron Curtain” speech about the Soviet Union at the dawn of the Cold War.

The editorial soon mellowed into a reflection on high points of the relationship between America and China, such as U.S. President Richard Nixon’s opening to China, and even took some credit for helping President Ronald Reagan put the Soviet Union out of business.

The Global Times then reiterated Beijing’s standard line about how soft, democratic America stands no chance against authoritarian China in a trade war and positioned Beijing as the more mature player in a conflict Washington has not yet realized it cannot win:

The US, in fact, has limited leverage to contain China. A trade war will inevitably damage the US and is a stupid choice. It’s unrealistic to establish a NATO-style organization to target China. It is impossible to isolate and contain China given its expanding business overseas and domestic markets.

It’s difficult for the White House and Congress to mobilize an anti-China campaign in US society. Gone are the days when the public was willing to take a plunge for the so-called national interest. As long as China keeps calm in the face of hysterical US political elites, the so-called Cold War will not take shape.

At such a time, China should play tai chi with the US. This is the unique strategic wisdom of the Chinese nation. We must make the US feel the pain of the trade war and not allow the US to act unscrupulously in the South China Sea and Taiwan Straits. But we must act in a calm way. China will continue to open up. A deteriorating outside world will not change that.

That last line became a Chinese political mantra with blinding speed after Pence’s speech to the Hudson Institute was compared to Churchill’s Iron Curtain speech.

On Monday, the Global Times pronounced China hurt and confused by the “stinging” speech Pence delivered to the Hudson Institute, filled with accusations that were “vitriolic, ruthless, and delivered in terms considered far from decorous.”

This second editorial invoked the “Thucydides Trap,” which has become another common talking point for Chinese politicians. The Thucydides Trap is a theory that posits ruling powers almost always go to war with rising powers, usually to the regret of both nations, unless extraordinary efforts are made to avoid conflict.

Beijing’s interpretation of Thucydides is that America has a unique responsibility to welcome China as a new global superpower and refrain from protecting American dominance by attempting to “contain” China.

As far as the Chinese are concerned, they are already doing everything a rising power could possibly do to ameliorate the concerns of the aging world hegemon, and they cannot understand why the Trump administration suddenly decided to make a “U-turn” at the urging of “hardliners” and commence efforts to contain China.

The Global Times defended the ad China took out in the Des Moines Register in September, widely seen as a major reason for the Trump administration’s complaint about Chinese interference in U.S. elections.

“Where is the U.S.’ long-hailed freedom of the press?” a state-run newspaper from one of the world’s most aggressive authoritarian regimes risibly asked. In a similar vein, the Global Times portrayed China as merely seeking to defend itself from a “U.S.-initiated trade war,” as if China has not been manipulating markets and stealing technology for decades.

The Global Times concluded President Trump is beating up on China to goose Republican turnout for the midterm elections and distract from “the Russiagate scandal”:

The reason that the Trump administration deliberately chose this timing – when China-US trade tensions are ratcheting up – to deliver the inflammatory speech is the upcoming US midterm elections.

Trump knows that playing the China card is always the safest option. It cannot only divert domestic attention from the Russiagate scandal and shift the political pressure from the president but also incite ordinary voters.

These unfounded accusations show that the understanding and judgment of the Trump administration on Sino-US relations are unprofessional, shallow and indiscreet, which is most worrying. The worsening atmosphere toward China in the US not only affects American public’ opinion on the country but also endangers the safety and interests of Chinese in the US.

When the leader of a state accuses other countries at will, how can he justify his reputation to improve bilateral ties? Perhaps the Trump government needs to think about how to show respect to China before requesting China to respect the US.

The Chinese appear to know the American left is very receptive to theories that President Trump relies on populist appeals to xenophobia and is desperate to distract from the investigation into “Russian collusion” in the 2016 election.