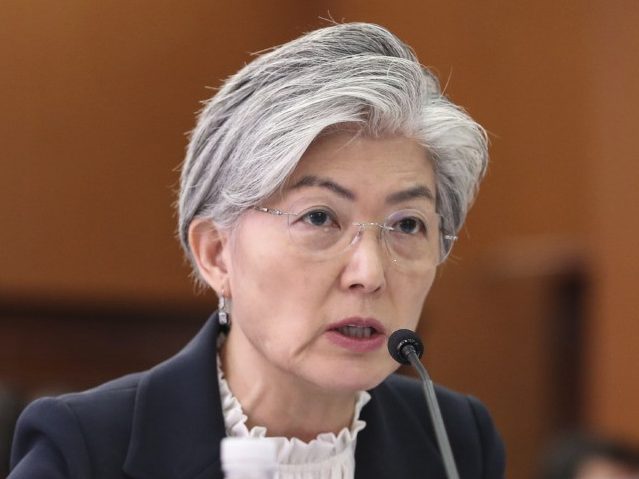 When South Korean Foreign Minister Kang Kyung-wha said on Wednesday her government was thinking about lifting some sanctions on North Korea, there were fears even a purely symbolic gesture along those lines could weaken the international coalition allied against North Korea’s nuclear missile program.

Right on cue, Chinese state media jumped in and encouraged Seoul to lift unilateral sanctions as quickly as possible in a gesture of fellowship with Pyongyang and defiance toward Washington.

Foreign Minister Kang told the Korean parliament on Wednesday that proposals were under consideration to lift sanctions unilaterally imposed against the North after the sinking of the South Korean warship Cheonan by a torpedo attack in 2010. These sanctions have since been superseded by South Korea’s participation in international sanctions against the North’s missile program, so lifting them would have had virtually no practical effect beyond making South Korean tourism to North Korean resorts a little easier, and even that was debatable.

South Korean conservatives nevertheless bristled with outrage at the notion of lifting the sanctions before North Korea admits responsibility for the Cheonan attack and apologizes.

There were also concerns about the response from the United States, which wants full sanctions maintained until North Korea gives up its nuclear missile program. U.S. President Donald Trump dismissed the idea of South Korea lifting sanctions in terms some South Koreans interpreted as patronizing, saying Seoul would “do nothing without our approval.”

South Korean Unification Minister Cho Myoung-gyon completed the walkback of Kang’s remarks on Thursday and insisted no plans are, or ever were, under consideration for unilaterally lifting the Cheonan sanctions.

Cho’s words evidently did not reach the offices of China’s state-run Global Times in time for the Thursday editorial, or else the Global Times simply ignored him to stir the diplomatic pot as much as possible. The editorial encouraged South Korea to lift sanctions as a rebuke to Trump and a demonstration of goodwill to both North Korea and China:

US President Donald Trump has already opposed the idea, saying, “They do nothing without our approval.” This shows that the US, despite its geographical distance from the region, holds the key for peace on the Korean Peninsula. Nonetheless, this may be the biggest stumbling block to peacefully solving the nuclear crisis on the peninsula.

For a long time, South Korea has been in a subjective position in its alliance with the US and could barely exercise its diplomatic independence on the peninsula issue. The US also maintains South Korea’s wartime operational control. Its over-reliance on the US does not help South Korea pull itself out of a security dilemma. Seoul has surrendered its initiative on the peninsula to Washington.

As the main stakeholder on the peninsula, South Korea does not have the capacity to shape its own interests, but has to follow the whims of the US. That is why South Korea had to respond to US displeasure during US Secretary of State Mike Pompeo’s visit to the country. Pompeo expressed dissatisfaction with an agreement reached last month between the two Koreas to reduce conventional military threats between them.

The deployment enraged China and even led to punitive sanctions against South Korea because the Chinese military hates its powerful sensor systems, which are easily capable of peering deep into Chinese territory as well as North Korea. Punitive measures imposed by Beijing against South Korean tourism were only lifted a month ago.

South Korea may have thought it patched up its differences with China over THAAD, but the Global Times editorial taunted the South Koreans as patsies for allowing the United States to move anti-Chinese defense systems into their territory under the pretext of protecting them from North Korea.

The Global Times wrapped up by attempting to kick for the extra point and telling the South Koreans to consider kicking U.S. troops off the peninsula to please Beijing and Pyongyang:

South Korea has been bold about engaging with the North recently and the US should be supportive of these efforts for the sake of regional peace. The gradual withdrawal of US troops can be coordinated with the denuclearization and reunification process of the Korean Peninsula.

China is teaming up with Russia to push hard for sanctions relief on North Korea, a push the United States will resist because it has long and frustrating experience with North Korea’s habit of collecting concessions and then reversing anything positive it has done. China and Russia explicitly challenged the U.S. model of complete, verifiable, irreversible denuclearization before sanctions are lifted, demanding a “pay-as-you-go” approach of rewarding Pyongyang for each nebulous step it takes. Nothing would encourage Beijing more than opening a rift, no matter how small, between Washington and Seoul.