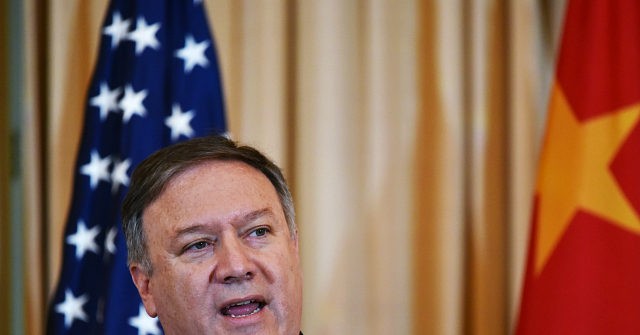 The Chinese Communist Party and its media organs were unsurprisingly livid at Secretary of State Mike Pompeo for mentioning the Tiananmen Square massacre on its 30th anniversary and for criticizing China’s human rights record.

China’s state-run Global Times on Wednesday claimed the trade dispute between the U.S. and China is proof that Washington does not care about the human rights of Chinese citizens.

The Global Times’ slam on Pompeo was arguably more restrained than furious comments from Chinese officials denouncing Pompeo as prejudiced, arrogant, hypocritical, and insane, but the Global Times made the same basic argument that America has no standing to criticize China for human rights violations:

In fact, the US has no credibility to hold the moral high ground. Its accusations are nothing but empty talk from a high-pitched speaker. Pompeo’s statement will not be echoed in Chinese society. Instead, it will reaffirm the Chinese public’s belief that current US administration is hostile to China, and Chinese cannot pin hopes on it.

Of course Pompeo’s statement “will not be echoed in Chinese society.” The totalitarian government will censor it and punish anyone who repeats it, much as it spends every anniversary of the Tiananmen massacre suppressing hundreds of words that might remind the Chinese public it happened.

The Global Times cited the trade war as evidence the United States does not really care about human rights:

Chinese are convinced that the US government is trying to deprive China of its continued development. Washington is treating interests of the US and China as a zero-sum game. It is well recognized that the rights of Chinese are mostly rooted in sustained national stability and development. The destruction of China’s stability and development is the ultimate deprivation of the rights of Chinese. The current US government is becoming the top hijacker of Chinese human rights.

Chinese are no longer so naive to believe the US is a protector of Chinese human rights. The US government always threatens to move jobs in China to the US or to Southeast Asia. They celebrate every sign that could be interpreted as economic downturn in China. Is that sincere compassion for Chinese human rights?

When Washington released information regarding trade war, it didn’t care about any negative impact it may have on China’s stock market or potential losses it may cause for Chinese stock investors. The US would rather see bigger losses on China to bring the country to its knees. The trade war launched by the US put the welfare of Chinese people at risk. Meanwhile, the same group of US politicians put on another face and made accusations about China’s human rights, as if they really care about human rights of Chinese people.

Under the campaign of “America First,” Washington has utilized its policies to eliminate the opportunity for social and economic development in many countries that will lead to the improvement of human rights. China is facing perhaps the most vicious and most hypocritical US government since its reform and opening-up.

The Global Times taunted Pompeo to prove he really cares about Chinese human rights by lifting the new visa restrictions on Chinese students. The restrictions in question limit some Chinese postgraduate students to one-year visas if they study in high-tech fields prioritized in the “Made in China 2025” agenda. The measure — and similar restrictions under consideration by Congress — is intended to combat intellectual property theft.