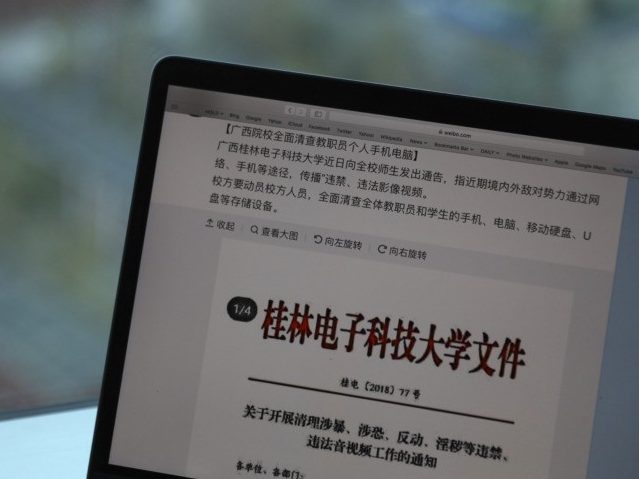 The Chinese government’s campaign to “clean up” the Internet includes a cash reward for reporting “illegal content” to the censorship bureau, plus another reward offered by a popular website for readers who help to crush “rumors” the government disapproves of.

China’s state media control agency, elevated to a cabinet-level agency this year and given consolidated control over all forms of communication, recently announced a reward of up to 600,000 yuan (about $86,000 U.S.) for citizens who report “illegal content” distributed through either print or electronic media.

The new reward is double the previous maximum bounty previously offered for reporting illegal content, which includes pornography, leaks of “state secrets,” information that “disturbs social order,” and anything else that “endangers national unity.”

The reward offer was accompanied by new rules requiring Internet providers and social media platforms to save a vast amount of information about their users and make it available to regulatory agencies and the police upon demand.

On Tuesday, the South China Morning Post reported on a new “fact-checking” initiative known as the “100” project launched by the nominally private corporation Bytedance, which produces a popular news aggregation app called Jinri Toutiao (the name translates to “Today’s Headlines”).

The app uses artificial intelligence technology to create a curated news experience of “appropriate content” for its users, salted with plenty of streaming video and animated cartoons to keep the young folks engaged. Since China has banned Facebook, the Bytedance app swooped in to fill the “news feed” gap and amassed over 120 million daily users, giving it an income stream of almost a billion dollars per year.

Jinri Toutiao’s new “100” project supplements the Communist Party’s speech control efforts by offering cash prizes for the one hundred “best articles that debunk rumors,” as the SCMP put it.

“We would like to invite the whole society and users of the platform to be supervisors and together participate in the governance of online platforms!” the news aggregator declared, portraying the “100” program as part of the global effort to stamp out “fake news.”

Jinri Toutiao’s enthusiasm for crushing “rumors” did not come out of nowhere. In April, the government shut down the app for two weeks and ordered it to clean up content that conflicted with “core socialist values.” CEO Zhang Yiming issued a groveling apology in which he declared he was so “consumed by guilt and remorse” that he could not sleep.

Zhang’s company quickly complied with orders to shut down the accounts of content providers accused of promoting “vulgar” material in order to “regulate order in the broadcasting environment and clean up cyberspace.” Zhang promised to increase the size of his censorship team from 6,000 to 10,000 employees and incorporate more artificial intelligence technology, co-developed with the University of Michigan, to detect and suppress undesirable content. The company soon boasted of blocking half a million articles full of “rumors” and banning over 9,000 “rumor-mongering” accounts.

There is no such thing as a “free enterprise” or “private-sector” company in China. Every Chinese company is an arm of the state and Communist Party, either directly or through regulatory control. In the case of Bytedance, not only does the company obey the commands of Communist speech control agencies without question, but its investors include Chinese state banks.

The international business community spent Tuesday pretending to be surprised that China’s richest man, Jack Ma of Alibaba, turned out to be a card-carrying member of the Chinese Communist Party after years of presenting himself as an independent billionaire who just happens to agree with Chinese Communist Party chief Xi Jinping about everything. One of the Party’s requirements for membership is periodic bouts of intense “self-criticism,” which is exactly the term used for Zhang Yiming’s sleepless nights of guilt and remorse after he was called on the carpet for distributing content unhelpful to “core socialist values.”