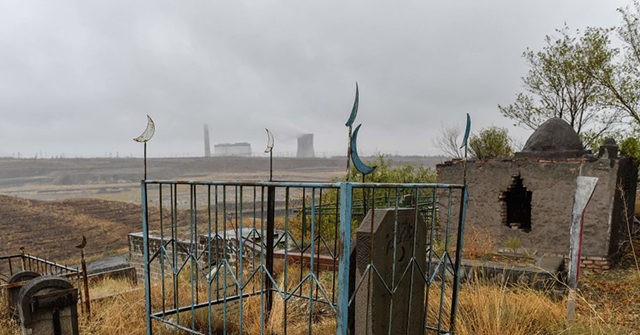 Radio Free Asia (RFA) revealed on Thursday that Chinese officials in Xinjiang have begun proceedings to destroy yet another Uyghur cemetery in the heart of the Uyghur homeland, Xinjiang’s capital Urumqi.

Reports throughout the past year have revealed a campaign of unearthing the remains of Uyghur families, often destroying them while leveling entire cemeteries. Some cemeteries have been turned into parking lots, while reporters found others simply stripped of their tombs, with bones lying about unidentified. Cemeteries are key to Uyghur culture as families are buried in the same locations for centuries, creating a historical record.

The cemetery destruction follows years of policies by the Chinese Communist Party to eradicate Uyghur culture and their religion, Islam, through banning Islamic practices like fasting for Ramadan, eradicating the Uyghur language from schools, and forcing between 1 to 3 million Uyghurs into concentration camps, where survivors say they endured indoctrination, torture, rape, and murder.

RFA noted that the source for the latest plans to destroy a Uyghur cemetery — a cemetery in the Bulaqtagh district of Urumqi — was the Communist Party itself, whose members posted a bulletin in the neighborhood announcing that the cemetery would be destroyed and the remains buried there moved. It remains unclear where the Party will reinter the remains, if anywhere.

The bulletin demanded that relatives of the dead in the cemetery register with the Party to ensure they would receive access to those remains once they were dug up. RFA confirmed the information on the bulletin with the “Urumqi Ethnic Affairs Office,” responsible for Uyghur cultural issues in the area.

“The announcement was published by the Urumqi Municipal Government. We are registering the families with tombs,” a receptionist at the office told the media network, noting that remains had not yet been dug up.

“However, when asked what the reason for the relocation was, she hung up the phone,” RFA reported.

According to a Uyghur exile speaking to RFA familiar with the Bulaqtagh cemetery in question, it is of “particularly important” cultural and religious significance, a physical database of the history of residents in several districts of the city.

The same is true of the at least 45 Uyghur cemeteries the Chinese Communist Party destroyed throughout 2019, documented by the Agence France-Presse (AFP) in an extensive report published in October. The AFP found that Chinese officials were not just destroying the resting sites of dead Uyghurs, but taking over the entire burial process for the newly dead to ensure that Islamic rites were not performed. Replacing the destroyed cemeteries were Party “burial management centers” that the regime claimed were necessary because burials required more young men to be around to carry bodies and dig graves, and millions of them were at the time in concentration camps.

AFP visited 13 of the 45 sites and found parking lots, empty fields, and plenty of human debris. Communist Party authorities claimed the bones the reporters found were not human, a claim AFP debunked through testing.

The same month the report came out, Chinese dictator Xi Jinping delivered a violent speech vowing, “anyone who attempts to split any region from China will perish, with their bodies smashed and bones ground to powder.” While Xi was also referring to the Taiwanese state and the refusal to accept communism in Hong Kong and Tibet, Xinjiang has also been home for decades to a robust Uyghur separatist movement that contends Uyghurs have no language or cultural ties to Beijing and deserve statehood for their native lands.

China calls its Uyghur concentration camps, which it blamed for the need for leveling cemeteries, “vocational training centers.” In December, facing global outrage and disgust at the existence of concentration camps in the 21st century, Beijing asserted that most of those imprisoned there had “graduated.” Three months later, the Australian Strategic Policy Institute (ASPI), a non-partisan think tank, published a bombshell report titled Uyghurs for Sale that detained where the “graduates” had gone: to factories nationwide to serve as slaves, manufacturing products for dozens of well-known, multinational companies like Nike, BMW, and Nintendo.

As the Chinese coronavirus pandemic raged in Wuhan and industrial centers like Shenzhen, mounting reports supported the allegations in Uyghurs for Sale, finding that factories emptied out by the virus resumed productivity largely due to the government forcing Uyghurs to take the place of Han Chinese workers, who were either too sick to work isolating at home to avoid becoming infected.