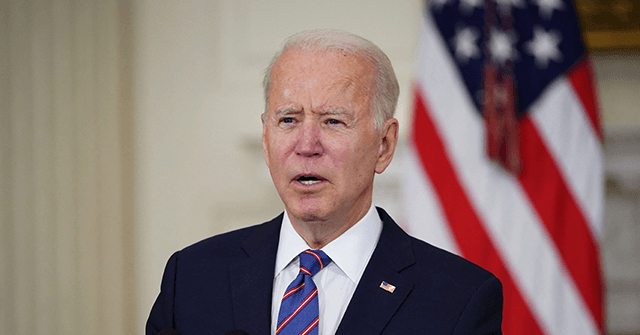 Chinese state media on Friday heckled President Joe Biden’s massive “infrastructure” spending proposal because the $2 trillion plan is supposedly “anti-China” in its outlook – meaning Biden has been selling the plan by stressing the importance of competing with China.

China’s state-run Global Times jeered that no U.S. administration could handle infrastructure projects as well as authoritarian China, where “the incentive to invest is strong and the general public is very supportive.”

The Global Times suggested Americans try learning some lessons from superior China instead of scapegoating it for alleged American failures and daydreaming about competing with it:

The US now has China everywhere in its mind with regard to its domestic policy, attaching labels of national security randomly, and blaming China for any industrial imbalance in the US. Apart from instigating nationalism, this would do little to solve the problem. Over time, the US will not only be down with an anti-China syndrome and strike at anything Chinese, but will also only be able to make its policy with anti-China elements. This will lead to the misdirection of its goal time and again and cause it lose its way in development.

The US should force itself to forget about China more often. What the US needs to do is struggling with itself. It has been more than a decade since it has called for the construction of the high-speed railway. Why hasn’t a single kilometer been built? What does this inefficiency have to do with China? Trump overturned many of Obama’s policies and now Biden overturned Trump’s policies. Is this what China seduced the US to do?

It is quite impressive that Washington is beginning to value some important lessons from China. Conflict is also a way to learn from each other. China’s key experience is to mind its own work well. Biden’s determination to improve infrastructure and increase investment in technology seems to have taken something from China’s direction. We hope that the US could adhere to this idea. It is the right way forward.

Another Global Times editorial said, “Chinese enterprises, with rich experience and strong ability,” are willing to participate in Biden’s infrastructure blowout – unless the Biden administration foolishly excludes them:

The infrastructure plan involves many sectors, but Chinese firms may have opportunities only in certain traditional infrastructure projects such as bridges, highways, and ports due to US’ current China policy, Gao Lingyun, an expert at the Chinese Academy of Social Sciences in Beijing who closely follows China-US trade relations, told the Global Times on Thursday.

“Chinese companies’ participation in the US has been influenced by the tense bilateral relationship over the past few years. They have encountered many obstacles and problems,” a wind power industry practitioner who used to work as manager at Chinese wind power enterprise Guodian United Power Technology Co, told the Global Times on Thursday, on the condition of anonymity. In the past few years, both United Power and Beijing Goldwind Science & Creation Windpower Equipment Co had projects in the US.

Apart from power, Gao added that in some high-tech sectors, such as the construction of 5G and 6G facilities, Chinese firms, even with fairly competitive strength that could save both money and time more effectively than their US counterparts, would be ruled out from the beginning.

The Global Times quoted Chinese analysts who said the U.S. is “underinvesting and overconsuming, as can be seen from its trade deficit,” and doubted any level of infrastructure enhancement would be enough to woo foreign investors back to the United States because America’s manufacturing sector has been “dormant” for too long.

These Chinese observers also thought the massive corporate tax hikes threatened by the Biden administration “sound horrifying for enterprises and affluent people,” who are “likely to transfer their wealth overseas to cities like China’s Shanghai or Hong Kong” to avoid Biden’s tax grabs.