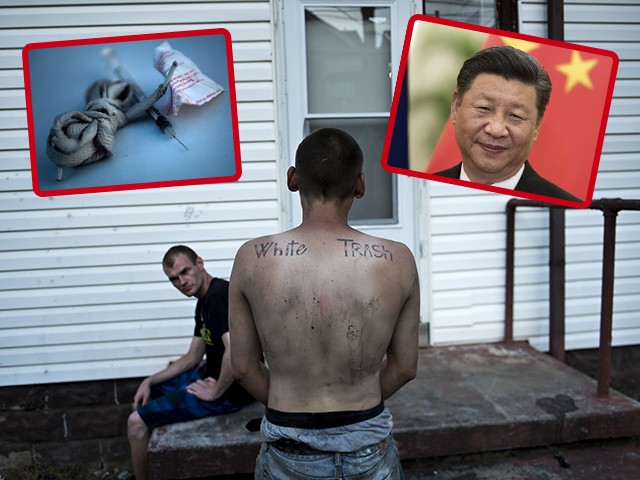 China’s Global Times state propaganda newspaper published an article Wednesday blaming America’s lack of “values” for its opioid crisis and in particular the use of fentanyl, a highly deadly opioid primarily manufactured in China.

The Global Times noted that Communist Party leader Xi Jinping recently agreed in a meeting with American President Donald Trump to designated fentanyl a “controlled substance” in China, which the nation had failed to do despite the widely documented deadly nature of the opioid. Such a designation, the newspaper claims, will trigger the highest possible punishment for fentanyl traffickers, capital punishment.

The Times deemed this a “wonderful humanitarian gesture,” arguing that it will likely do little to stop fentanyl deaths in the United States because China is not responsible for the moral decay that leads Americans to try the drug.

[T]his U.S.-China fentanyl pact is not expected to have a quick impact on the drug’s skyrocketing use in the U.S.,” the article predicted. “It is well-nigh impossible to eradicate fentanyl in the U.S. as well as prevent addicts from using substitutes because traffickers will not stop smuggling drugs due to lucrative profits. … demand for the drug is too strong.”
According to the Global Times, the fentanyl problem stems from Americans’ comfort with all drugs, not just highly deadly opioids.

“Drug abuse in American society is very rampant with addiction multiplying sharply in many areas. It is hard to find even one young person in the country who hasn’t tried drugs,” the newspaper noted, backing their claim with statistics for the use of any drugs, including drugs like marijuana, rather than any statistics for fentanyl use only. “According to U.S. government figures, the number of people who use at least one type of drug a year is approximately one-sixth of the country’s population,” it alleged.
In contrast, “the government and the entire Chinese society have always had a zero-tolerance policy to drugs.”

“No country can be as stringent as China in preventing drug abuse and trafficking,” the article claimed. “Whoever found involved with drugs will be punished. Chinese law provides for the death penalty for those involved in manufacture, smuggling and trafficking of drugs.”

Threatening death to anyone involved with drugs in any way, the newspaper nonetheless conceded, is less effective than eradicating “social tolerance of drug use,” perpetuated by people like President Barack Obama, who the article name-drops for having admitted to marijuana use.

“In the U.S., consuming marijuana is considered a private affair or even a manifestation of personality and taste,” it continues. “For instance, former president Barack Obama publicly admitted to smoking marijuana at an early age. More than that, many U.S. states have been making efforts to decriminalize the non-medical use of the narcotic.”
Despite spending so much of the article’s time on marijuana, the Global Times does not offer an explanation for its comparison between marijuana and fentanyl. Marijuana has a long history of medicinal use. The U.S. National Institute on Drug Abuse states on its page that the reason marijuana use is so regulated is because “researchers haven’t conducted enough large-scale clinical trials that show that the benefits of the marijuana plant,” not because of any documented dangers. “Because the marijuana plant contains chemicals that may help treat a range of illnesses and symptoms, many people argue that it should be legal for medical purposes,” the agency notes.

Recent studies suggest the drug has high “potential to relieve pain, treat post-traumatic stress disorder and aid in the recovery from opioid addiction.”

In contrast, fentanyl, which has limited medicinal use in cases of terminal illness or extraordinary pain, has no documentary use to help in healing diseases, only with relieving pain. An article on fentanyl abuse by the Harvard Health Blog advises that, unlike marijuana use, “every single episode of fentanyl use carries the risk of immediate death.”

The U.S. Center for Disease Control documented tens of thousands of fentanyl overdose deaths in 2017, about half of all opioid overdose deaths. It has been the most common killer of opioid addicts in the United States since 2016. In cities like St. Louis, Missouri, over 95 percent of opioid overdose deaths were the product of fentanyl use. Experts note that fentanyl offers a similar high to heroin or other opioids but with significantly more potency. Since the Chinese market offers drug dealers easy access to fentanyl, many blend it into street offerings of heroin, so many who die of fentanyl overdoses do not even know they have ingested the drug when overdosing.

The Global Times is not the only arm of the Chinese government to blame the opioid epidemic on America’s allegedly inferior culture.

“The United States should look within to cut down demand for opioids which are fueling its deadly drug crisis rather than stressing unsubstantiated claims that China is the major source of these chemicals,” Yu Haibin of the China National Narcotics Control Commission said last year, accusing the United States of “a lax cultural attitude” towards drugs and making a similar argument that marijuana, despite its potential to fight opioid addiction, has had a “bad effect” on “the public’s attitudes and trends of thinking toward drugs.”