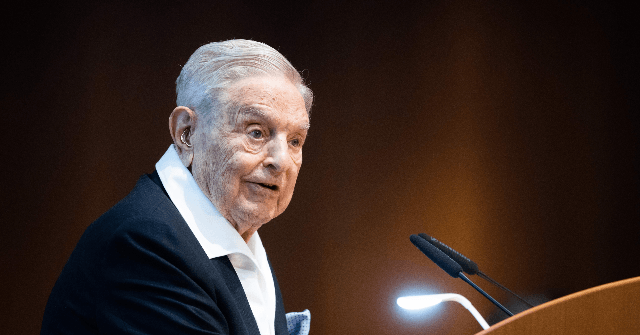 Soros wrote that the Trump administration was correct to view Huawei’s electronic products as a national security risk and expressed deep misgivings that China’s totalitarian “social credit system” could “sound the death knell of open societies not only in China but around the world.” His overall tone was not one of gushing praise for Trump, but rather apprehension that Trump will yield on Huawei and other security issues to secure a trade deal with Beijing.

The Global Times spent about half of its editorial response lambasting Soros for making millions with currency speculation, a game he could never play in China because “the central government’s effective control over capital flows of hot money has checked the intention of US financial giants such as Soros to make profits by speculating in the Chinese financial market.”

According to the Global Times, Soros was only critical of Chinese Communism, Huawei, and the social credit system because he is a sore loser frustrated that China will not let him play around with its financial markets.

Although the editorial promised China “has made and will make progress in opening up its financial sector,” it implied Soros probably should not hold his breath waiting for an invitation to speculate. Another Global Times piece on Tuesday taunted Soros for allegedly attempting to short sell Hong Kong stocks, calling him a fool for thinking he was up against “the collective investors of Hong Kong” instead of the implacable authoritarian might of “the world’s second-largest economy.”

Without ever addressing a single thing Soros wrote in his editorial, the Global Times proceeded to lump him in with other “U.S. elites” and claim the real story is that they are all scared of China’s Belt and Road infrastructure plan.

“These elites contend Beijing poses a threat to Washington and have tried to suppress and contain the development of Beijing’s economy. It is not surprising that Soros, a member of U.S. financial elites, uttered such harsh remarks against Beijing,” the editorial huffed.

The Global Times concluded by advising the Chinese government to “guard against any attempt to crack down on China by using a trade war or financial war” and do everything possible to thwart “some U.S. right-wingers,” presumably like Soros, who “want an economic decoupling from China.”