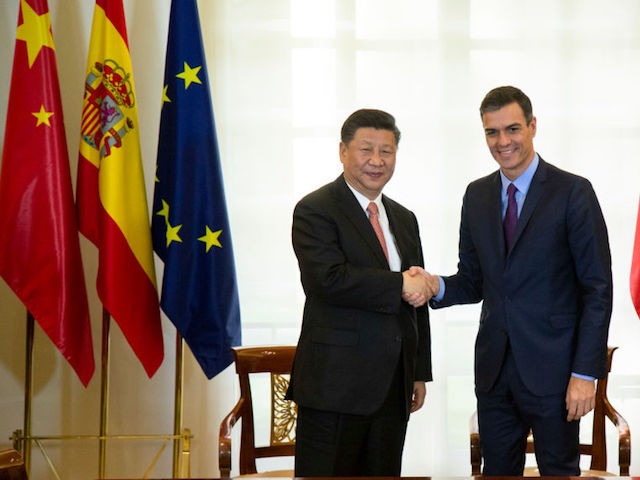 Prior to landing in Madrid on Tuesday, Chinese Communist Party chief Xi Jinping published a Spanish-language editorial proclaiming that Spain had been a key stop on the ancient Silk Road “more than 2,000 years ago.”

In the modern day, he continued, Beijing’s Belt and Road project would remain incomplete without an anchor in Western Europe.

Xi’s plea to Spain, which he is expected to bring to Portugal later this week, is essentially to allow the Chinese communist regime to become an indispensable part of a functional Spanish economy. It is a proposal he has sold with tremendous success to indebted dictatorships throughout Southeast Asia, Africa, and Latin America – much to the chagrin of the Trump administration, which has ramped up efforts to warn the developing world away from Beijing’s “debt traps.” Yet those who have exposed China’s weaponizing of debt to take over key ports, roads, and railways in places like Kenya and Sri Lanka have largely ignored Xi’s efforts in Europe, where only the weakest economies seem to get invited to hop onboard the Belt and Road train.

The Belt and Road Initiative (BRI), Xi’s plan to dominate the world’s most important trade routes, was launched in 2013 as a way for developing nations to have access to better transportation infrastructure while China expanded its influence around the world. China offered to lend billions to countries around the world if they agreed to allow Beijing to send workers to construct infrastructure projects ranging from ports to high-speed railways to maritime facilities allegedly aiding safe passage through remote waters.

The nominal objective of the BRI is to reconstruct the ancient Silk Road, used to exchange goods between Asia and Europe. Yet it took little time for China to stray from the geography of the original pathway, instead investing heavily in projects throughout Africa and claiming that nations like Venezuela and Cuba had a place on the ancient Silk Road. The result has been the accumulation of territorial control in some of the weakest countries China preyed upon. Sri Lanka was forced to hand over control of its key Hambantota port last year. The Maldives, on the road to bankruptcy, revealed this week evidence suggesting China was deliberately overcharging on Belt and Road projects to force the country to forfeit key assets.

With both the funding and popularity of the BRI collapsing in the global south, Xi has turned his eye to Europe. Spain and Portugal, should they agree to participate in these Chinese projects, will join fellow European nations like Greece, Montenegro, Ukraine, and Belarus in cooperating with Beijing. The nations all appear to have one thing in common: weak governments or economies burdened by massive debts.

According to the CIA World Factbook, Greece is the most heavily indebted country in the European Union, owing a sum equivalent to 180 percent of its GDP. Portugal is number four and Spain is in sixth place with 127 percent and 96.7 percent of the value of their GDPs, respectively. Montenegro boasts a national debt 71 percent the size of its GDP. Ukraine’s national debt is 89 percent of a GDP that has continued to dwindle since Russia invaded and occupied both its east and the Crimean peninsula in 2014. Belarus, the last remaining 20th century-style communist dictatorship in Europe, also has a debt worth over half the nation’s GDP.

At the top of the national debt list, Greece is the only European country to have already sold a major port to China. In 2015, at the height of the Greek debt crisis, China swept in and bought a commanding share of the port of Piraeus. Greece used the money from selling the port to make a payment to the European Union and stabilize itself, but nonetheless gifted China access to the Mediterranean.

“While Europe was busy squeezing Greece, the Chinese swooped in with bucket-loads of investments that have begun to pay off, not only economically but also by apparently giving China a political foothold in Greece, and by extension, in Europe,” the New York Times explained in 2017. As recently as August, Greece agreed to sign up for even more Belt and Road projects.

Montenegro, a small Balkan country, does not offer the same resources to China as Greece, yet it is currently home to one Belt and Road project: the “road to nowhere” connecting the port city of Bar with the country of Serbia. Local politicians have warned Montenegro simply does not have the money to afford such a project and suggested China may soon control it entirely.

In Ukraine, China recently signed a $2 billion deal for a new metro system in Kiev. It has also offered help in upgrading ports along the Black Sea. Control of a Ukrainian port would allow China to control land on both ends of the Russian border, which should be alarming to Moscow, but China is working hard to avoid that impression, pressuring the Ukrainian government to accept Russia’s illegal invasion of its sovereign territory.

China’s Belt and Road price tag in Europe has surpassed $300 billion. There are no signs that Xi intends on stopping there.

“The two sides should intensify cooperation in such areas as economy, trade, tourism, and third-party markets within the framework of the Belt and Road Initiative,” Xi told Spanish King Felipe VI on Tuesday, “so as to bring the Sino-Spanish comprehensive strategic partnership to a new high in the new era and better benefit the two peoples.”

Spain responded by hosting a concert in honor of the BRI that night “to strengthen the dialogue and understanding between people and to promote cultural exchange between two countries (China and Spain) through music,” according to China’s Xinhua agency.

Portugal, meanwhile, “is an important participant of the first Belt and Road Forum for International Cooperation, and it is also one of the founders of the Asian Infrastructure Investment Bank(AIIB),” the Chinese state publication People’s Daily argued on Wednesday. Portugal is of particular concern for China because, according to the newspaper, it has “the best natural port resources in Europe.” Control of a port in that country would grant China new and more stable access to the Atlantic Ocean than similar ventures in places like Nigeria or Venezuela.

Much of the developing world has begun to awaken to the threats of the BRI to their sovereignty, but geography and traditional attitudes towards colonization have kept Europe from yet seeing the reality of Xi’s plan. As Xi makes his case to western Europe this week, it is more important than ever for the target nations to study the results of Chinese investment around the world.