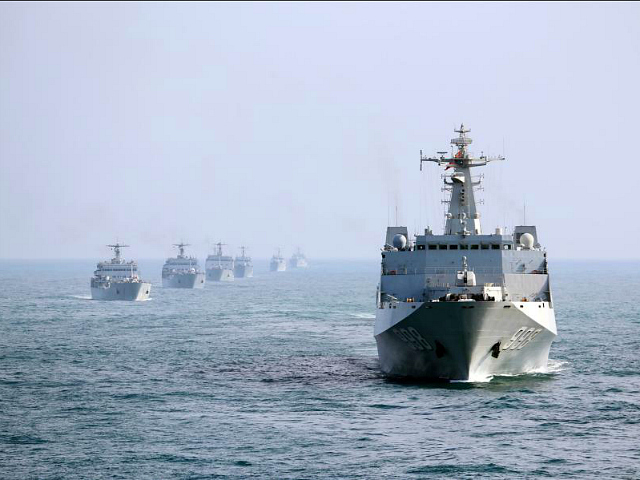 China’s People’s Liberation Army (PLA) has greatly increased its presence in the Taiwan Strait, part of the greater South China Sea, in response to the growing number of freedom of navigation operations (FONOPs) by the U.S. Navy, the South China Morning Post reported on Monday.

The Post confirmed the news with the Taiwanese Defense Ministry, which operates independently of Beijing. While Taiwan is a sovereign nation with a fully functional federal government, the Chinese Communist Party regards it as a rogue province whose government requires submission to Beijing. A Taiwanese source told the Hong Kong-based newspaper that China’s military has increased “irregular” operations in the Taiwan straight and mirrored American activity in the region.

“Each time the U.S. sent warships through the Taiwan Strait, the PLA has also dispatched its fleets to track the U.S.’ movements,” the source reportedly said.

The Defense Ministry itself told the Post through an official response to a query that the PLA had “effectively monitored the situations and movements around the Taiwan Strait by means of its air and naval mechanisms to ensure national security and regional stability.”

Last week, the Chinese government issued yet another protest regarding the U.S. Navy’s presence in the region. The United States runs routine FONOPs in the international waters of the South China Sea, which is legal under international maritime law. The objective of these exercises is to prevent the Chinese communist regime from claiming those waters as sovereign Chinese territory. China claims most of the South China Sea, including all of Taiwan’s sovereign territory and waters belonging to Vietnam, the Philippines, Brunei, Malaysia, and Indonesia.

Despite an international court at the Hague ruling China’s claims the area illegal in 2016, China has continued taking possession of reefs and other structures, particularly in Vietnamese and Philippine territory, for military and civilian use.

Without the American FONOPs, if China succeeds in intimidating all non-Chinese vessels out of international waters, it may successfully argue that it has possessed those waters over time.

On Friday, the Chinese military confirmed that it had identified two American ships sailing through the Taiwan Strait, a legal activity.

“The PLA will remain vigilant and resolutely safeguard national sovereignty and territorial integrity,” Senior Colonel Ren Guoqiang said at a press conference about the passage, according to the state-run Chinese People’s Daily.

Foreign Ministry Geng Shuang also complained on Friday of a different U.S. Navy passage, this time through Vietnam’s Paracel Islands, which do not legally belong to China.

“On November 26, a U.S. Navy ship trespassed into China’s territorial waters off the Xisha [Paracel] Islands without approval,” Geng asserted. “China immediately sent military vessels and aircraft to identify and verify the U.S. warship in accordance with the law, and warned it off. The Chinese side has lodged solemn representations with the U.S. side.”

Geng accused the U.S. Navy of having “violated the Chinese laws and relevant international laws, severely undermin[ing] China’s sovereignty and put[ting] in jeopardy the peace, security and sound order in relevant waters.”

Many in Taiwan appear to disagree with China’s claims, particularly in its waters. In a column published on Tuesday local time, writer Cheng Tien-chu of the Taipei Times accuses China of flagrantly violating the “red lines” of international maritime diplomacy on a regular basis.

“Freedom of passage in international waters cannot be disturbed or interrupted. There is a “status quo” honored by the free world and the U.N.,” he writes. “As early as 2009, China has increased construction of artificial islands and laid claim to 1,295 hectares of land and 90 percent of the South China Sea as its territory.”

“Today, it is clear that the islands feature military-length airstrips, anti-aircraft and anti-missile weapons and naval guns. Cuarteron Reef (Huayang Reef, 華陽礁) has a new high-frequency, early warning facility to detect aircraft, a development not consistent with peaceful missions,” he continues. “China has ignored and clearly stepped on the red line and crossed it.”

“There is no question that China under [Communist Party leader] Xi [Jinping] is ready and dares to challenge US vessels’ presence in the free, international South China Sea,” Cheng writes, adding that the Communist Party “has never ruled Taiwan” and has no valid standing for its claims.

Under current President Tsai Ing-wen, Taiwan has asserted itself more aggressively on the international stage, urging the world to reward Taiwan’s democracy with support against China’s belligerence.