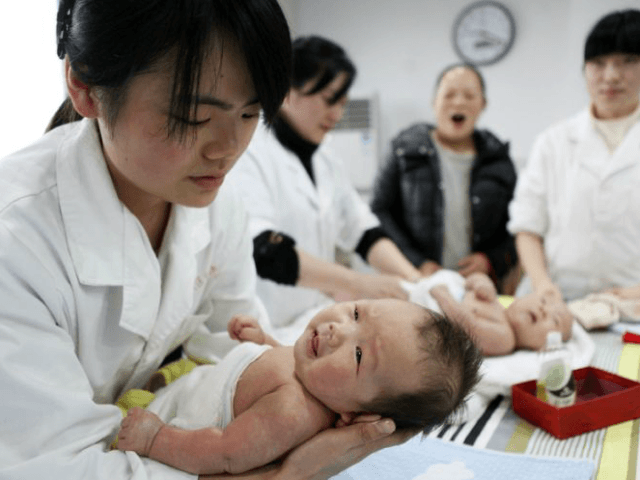 China’s authoritarian government has been sending mixed signals about population control to the populace. On one hand, the government admits it faces a demographic crisis that can only be solved by increased fertility rates and large families, sending signals to the public that having two or three children is now their patriotic duty.

On the other hand, a couple from the eastern province of Shandong is suffering steep fines and persecution for the crime of birthing a third child.

The South China Morning Post reported on Wednesday that the Shandong couple’s bank account has been frozen because they refused to pay a fine of 64,826 yuan, which works out to about $9,500 U.S., and is roughly triple what the couple had in the bank.

The couple, Wang and Liu Mouhua, are residents of a village called Lizhuang. They gave birth to their third child in January 2017, at which time the county Health and Family Planning Bureau invoked China’s draconian national and provincial family planning laws to hit them with a massive “social maintenance fee.”

Statements from the county “People’s Court” indicate the government has essentially confiscated everything the Mouhuas had in the bank and intend to collect another 22,957 yuan from them. If the family does not pay its “social maintenance fee,” their third child will have difficulty obtaining full citizenship and accessing the Chinese educational system, a fate that befell almost eight million children born in violation of the old One Child policy.

Fellow villagers protested the couple’s rough treatment, but they were “educated” and “rectified” by county officials.

According to the South China Morning Post, the Chinese national audience has become aware of the case and responded with incredulity online. Legal experts cautioned that responding to subtle signals, such as the Communist government issuing a postage stamp of a happy little pig family with three piglets, is dangerous until the laws are officially rewritten:

“Is the country joking? It’s urging people who don’t want to give birth to give birth but punishing those who want to,” one commenter wrote on the Chinese microblogging platform Weibo.

“Taking all the money away from the family, do you want the whole family to die? What about protecting the rights of the baby?” another wrote.

Stuart Gietel-Basten, a professor of social science and public policy at the Hong Kong University of Science and Technology, said the Shandong case was nonetheless in line with existing law.

“While the actions in Shandong seem counterintuitive, it is important to remember that birth control restrictions are still in place,” he said.

“Remember, too, that social maintenance fees for out-of-quota births are an important source of local revenue and that a family planning apparatus still exists with jobs to do.”

The Shandong couple is caught at the intersection of two serious problems with China’s fertility policy. The obvious one is that the Communist tyrants are afraid they will lose control if they expressly authorize families with three or more children, even though such families are indispensable for population growth. Beijing does not wish to openly admit the old One Child policy was foolish, counterproductive, and morally reprehensible, so it dreams of continuing its pose as wise scientific master of human biology by ordering couples to have two children but forbidding a third.

The other problem lies in where these children are born. China wants its educated urban class to have more children, not villagers. Unfortunately, this demographic group has not responded with enthusiasm to the legalization of second children. This is partly a result of a childless culture evolving during the decades of One Child tyranny. Inertia from that culture lingers, especially among young Chinese professionals who fear employers are reluctant to hire women with children because they want to minimize payroll costs.

China Daily responded to the Shandong case on Thursday with an editorial calling for administrative mercy on the couple, which “apparently led a hand-to-mouth existence while raising three children” and could never pay the exorbitant fines levied against them.

The China Daily editorial castigated “dogmatic rule-of-law officials” for punishing three-child families at the same time Beijing is offering bigger tax breaks for children to reverse China’s demographic collapse. Provincial courts were urged to give the couple more opportunities for judicial review before their life savings are seized.

The implication of this editorial posture is that China might have trouble clearing all the fines and other legal debris from the clogged arteries of its bureaucracy, and might be afraid of the results if it expressly legalized large families, so the best approach might be leaving the penalties on the books but enforcing them with a softer touch, or perhaps enforcing them arbitrarily to ensure the “right” couples have more children.