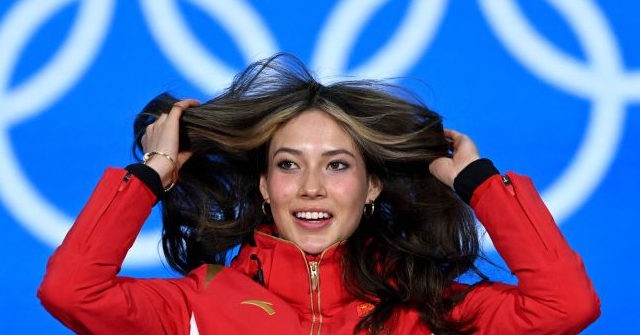 Gu, who won a gold medal in the women’s big air freestyle event this week, has expressed support for left-wing causes and refused to clarify her citizenship status. Given that China does not allow dual citizenship or allow foreign citizens on its Olympic team, however, it is likely that she chose to give up her American citizenship. She competed in her sport as an American in 2019 before defecting.

Gu has become the face of Chinese government propaganda about the Olympics for several reasons, including the poor performances of actual Chinese athletes at the Games and the success of the international movement to boycott the Olympics in the name of the victims of Chinese communism. While human rights activists failed to convince a single government to boycott the Olympics as a protest against those abuses, NBC has recorded record-low ratings for Olympics events in the United States and Americans are largely ignoring the event.

On Wednesday, the Global Times claimed that Gu had not only succeeded in galvanizing Chinese fans but in attracting the praise of Chinese-Americans who were previously allegedly “afraid of showing their cultural identity.” The article does not at any point distinguish between Han Chinese ethnic identity and support for the Chinese Communist Party, which controls the Olympic team.

“One can be both and let the dual cultural background be a bonus, not a burden,” the propaganda outlet declared.

Gu was allegedly particularly important for Chinese-Americans, according to the Times, because America is so racist.

“As the US faces more and more prominent racial problems, outstanding athletes with a dual cultural background at the Beijing Winter Olympics will be an awakening for the country to reflect on its deep rooted racism against Asian people,” according to the government publication. “Yet the effect will be limited, observers said. They are also certain that a more open and prosperous China will be able to draw more and more talents with Chinese descent to contribute to it.”

The Times cited as an example of Gu inspiring Chinese-Americans to be more comfortable with the Chinese government an article in Cosmopolitan by Cathaleen Chen that celebrated Gu for making her feel less “guilty” about rooting for athletes that represent the Communist Party. The full article wholeheartedly praised Gu, asserting her defection was “the liberation I needed,” but notably absent from the Global Times‘ summary of Chen’s column was that Chen recognized the grotesque human rights abuses the Communist Party is guilty of, albeit with reservation. Chen also explicitly distanced herself from the Chinese Communist Party.

“At the same time, some of Eileen’s most vocal critics are fellow Chinese Americans,” Chen wrote. “They argue that by competing for China, Gu condones the ongoing persecution of the minority Uighurs in western China, the violent 2019 to 2020 Hong Kong pro-democracy protests, and the mysterious detention of Peng Shuai, the three-time Olympian and tennis star who accused a former CCP official of sexual assault in 2021.”

“And I get it,” she conceded, concluding that supporting Chinese athletes were not “akin to signing a blood oath to the CCP.”

Chen delved into China’s record as arguably the world’s worst human rights criminal, far more than Gu herself has. While openly supporting political causes in the United States like Black Lives Matter, Gu has yet to issue any statements about the ongoing genocide of the Uyghur people in occupied East Turkistan, the repression of dissidents in Hong Kong, and the live harvesting of organs from imprisoned “counterrevolutionaries.” Gu has claimed that her decision to defect to China was an act of feminism, to help inspire Chinese girls and women – a prime opportunity to mention the horrific abuses that women face in that country that Gu has yet to take.

“The opportunity to help inspire millions of young people where my mom was born during the 2022 Beijing Olympic Winter Games is a once-in-a-lifetime opportunity to help to promote the sport I love,” she remarked in June, describing her decision to abandon her home country. “Through skiing, I hope to unite people, promote common understanding, create communication, and forge friendships between nations.”

China is one of the most repressive countries in the world for women. For decades, the government imposed a “one-child policy” banning women from having more than one child, resulting in millions of deaths of unborn children and infanticides. The infanticides were largely of baby girls, as many families would prefer a son if they had to have only one child. That policy has since been expanded to a “three-child” one, but forced abortions and infanticides are still a common policy used against Uyghur girls and women. China has also launched a sterilization campaign against the Uyghur people, forcibly sterilizing thousands of women in entire villages throughout East Turkistan.

Gu has yet to comment on these issues at press time.