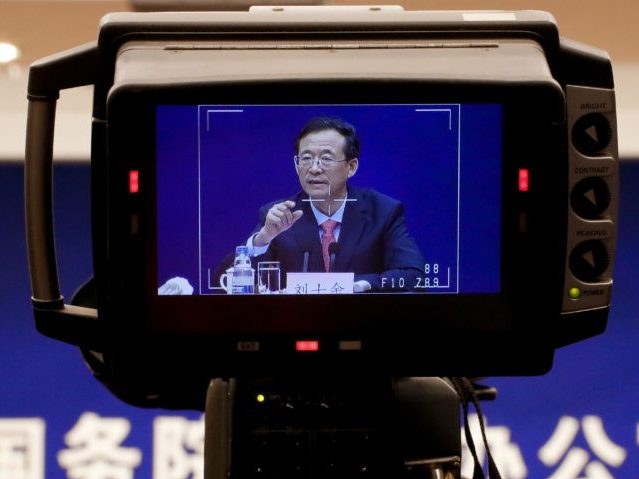 China’s state-run Global Times reported on Friday that officials have drafted a new regulation banning foreign news from distribution in China. The goal is to “prevent Western ideology infiltration and destabilization of China.”

The new rules would prevent all Chinese individuals and organizations from importing foreign news programs unless they obtained special permission from the government:

According to the regulation, the State Council will be in charge of the work to approve imported foreign audio and video programs that concern national security, diplomatic relations, ethnicity and military.

China’s TV broadcasting agencies that fail to get approval from related authorities are banned from broadcasting overseas audio and video programs between 7 to 10 pm, according to the draft regulation.

“Some foreign organizations may use overseas news programs to deliberately disseminate their ideology to the Chinese public and such programs may also contain political or economic appeal, which may undermine the relationship between the Chinese government and its citizens or even sabotage social stability,” explained Communication University of China professor Wang Sixin.

“Stressing the core socialist value is to prevent some overseas personnel from circulating improper ideology in the name of cultural differences,” Wang added.

These concerns about subversive attacks by Western media are a bit rich coming from the country that uses its economic muscle to make foreign companies stop selling T-shirts that supposedly challenge its territorial claims.

China’s state-controlled news outlets incessantly complain about Western “media bias” against China, frustrated by the way Americans and Europeans get hung up on little details like the Chinese kidnapping people in the middle of radio interviews, waging psychological warfare against the elderly widows of deceased dissidents, and tossing entire provinces in jail.

The Chinese are also peeved at the United States for ordering Chinese state media operations Xinhua and China Global Television to register as foreign agents this week. The designation will require the Chinese outlets to file additional disclosure forms, include disclaimers with their content notifying readers and viewers of their foreign agent status, and possibly lose access to some U.S. government media events.

The U.S. action was, in part, meant as a rebuke to Chinese censorship and hostile treatment of foreign media. That treatment would become far more hostile if the new rules described by the Global Times are enacted, a decision that will evidently be made in late October.