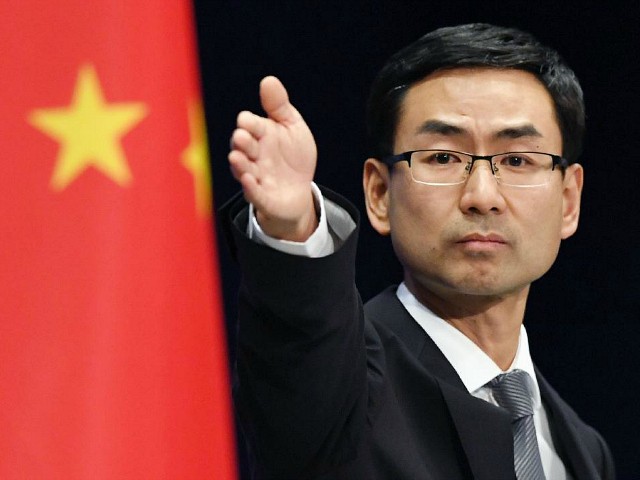 Chinese Foreign Ministry spokesman Geng Shuang insisted the Chinese delegation to APEC was “polite and well-behaved” at all times, dismissing reports of misbehavior as an unbelievable fabrication.

Chinese officials were said to have “forced their way” into Foreign Minister Rimbink Pato’s office on Saturday to complain about the draft version of the APEC joint statement, which included language about “unfair trade practices” the Chinese took as criticism of their policies. In the end, no joint statement was issued for the first time in 25 years. Papua New Guinea police were reportedly obliged to protect Pato’s office against further intrusions.

The Chinese Foreign Ministry spokesman on Tuesday accused the U.S. of lying about the reason APEC ended without a joint statement, instead claiming the summit ended with APEC nations taking China’s side against the United States:

During the meeting, the trade issue, which is the concern of all parties, was discussed, with focus on the multilateral trading system. The majority of members voiced their support for multilateralism, multilateral trading system and the due role of the WTO. Many members, in particular developing members, made clear their position on opposing trade protectionism and upholding the development interests and space of developing countries. They have chosen to stand on the right side of history.

Geng went on at length about the World Trade Organization and alleged controversy over anti-protectionist “reforms” without ever quite getting around to explaining why such a debate would prevent APEC from issuing a joint declaration. The closest he got was claiming “more in-depth discussions are needed to narrow down differences and expand consensus.”

Geng also failed to offer any evidence that reports of Chinese diplomats causing a scene at the Papua New Guinea foreign ministry were false, although he found time to complain about the American delegation’s behavior later in his press conference:

China attended this APEC meeting with utmost sincerity. In his important address at the meeting, President Xi Jinping stated China’s position and proposition on how to promote world economic development and enhance global economic governance, and offered proposals on how to deepen cooperation in the Asia-Pacific. Our remarks targeted and challenged no one.

But I believe you all know how the US behaved at this meeting. It seemed like the US attended this APEC meeting with great anger. Its speeches and remarks at the meeting openly caused controversy, created discord, spoiled the atmosphere of the meeting and did not contribute to achieving consensus and carrying out cooperation.

“By the way, anger can take a toll on the body and is bad for the health. Whoever gets angry easily will only end up hurting himself,” Geng added, overlooking the benefits of healthy exercise that might be gained by beating on the doors of the Papua New Guinea foreign minister’s office.

Foreign Minister Pato said through a spokesman on Monday that the reports of Chinese aggression upon the doors to his office during the APEC summit were “exaggerated” and the visiting diplomats “did not push their way into the room.”

In Pato’s telling, he explained to his Chinese visitors that he could not meet with them because it was important for his government to remain “impartial” as host of the APEC meeting. He said the Chinese “left the area” when his decision not to meet with them was “confirmed” and felt their behavior was “not an issue.”

The PNG government sought to downplay the incident as soon as it became public knowledge, even though reports of the encounter published by sources such as Australia’s ABC were quite specific and supported by multiple independent sources:

Four Chinese officials barged into the office of Papua New Guinea’s Foreign Minister Rimbink Pato on Saturday afternoon after being denied a meeting.

The ABC understands the Chinese Senior Officials Meeting negotiators wanted to meet with the Minister to discuss the wording of the APEC final communique.

When they were repeatedly denied a meeting they pushed their way into Mr Pato’s office, calling out to the Minister for two minutes of his time.

Security was called to the office and the officials had to be forced from the room.

The officials eventually left of their own accord.

ABC noted that several other PNG officials complained about Chinese “bullying,” and the Chinese undeniably angered international media by denying them access to a pre-summit meeting between Chinese President Xi Jinping and Pacific leaders, even though the PNG government invited them to cover it.