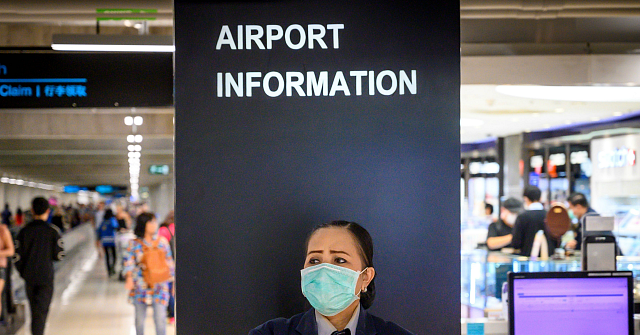 China’s state-run Global Times insisted the number of coronavirus cases is dropping everywhere except for Hubei Province, the center of the outbreak, which “clearly shows the top-level preventive measures adopted across the country have taken effect and this severe epidemic has been put under control.”

Claiming that travel within China is beginning to return to normal, the Global Times declared, “It is high time for countries which have imposed travel restrictions on their citizens to reconsider this measure.”

The editorial continued by quoting, as China frequently does, the World Health Organization’s (WHO) opinion that travel and trade restrictions against China were not necessary to combat the epidemic.

“This is based on the fact that the Chinese government has adopted strong and effective control measures. China has not failed the WHO’s trust and it has achieved the strictest control over the virus,” the Global Times trumpeted.

At least 14 countries resolutely ignored WHO’s advice and quickly imposed travel bans on China. Many airlines independently canceled service to all or part of China, independent of the steps taken by national governments. Many of these bans were implemented without warning, leaving travelers stranded and separated from each other.

“Some countries have completely cut off traffic communications with China and even banned non-citizens who have been to China within the last 14 days to enter their country. This is a serious violation of WHO recommendations. As the situation has significantly relaxed in recent days, these countries should reconsider and revoke these practices,” the Global Times urged, citing the enormous cost of the travel bans.

“As China has made a lot of efforts and explorations to control COVID-19, it is completely irrational to implement inter-country isolation to prevent the spread of the disease. It is unscientific and also violates the interests of all countries,” the editorial observed, using the formal name assigned to the disease, which China very much wants the rest of the world to stop referring to as the “Wuhan virus.”

The travel bans so disliked by China were meant to be temporary, and many of them had specific expiration dates. On Thursday, Australia announced that its ban on Chinese travelers, originally set to expire on Saturday, would be extended for at least one more week and would be reconsidered again at that time.

This decision, which will clearly have expensive ramifications for Australia’s $8 billion tourism industry with China, was made in part because of a sudden spike in new coronavirus cases. The number of cases China reported from the center of the epidemic in Hubei province shot up by over 14,800 on Wednesday, plus another 242 reported deaths.

The surge in new cases occurred only a few days after Chinese officials claimed the number of new cases was declining and the epidemic might be peaking. WHO sought to cushion the bad news by saying the spike in coronavirus cases was largely due to China using better and faster testing methods, along with a clump of results from the older and slower methods coming in at the same time. The new infection standards have only been implemented in Hubei province thus far, so the total number of infections would presumably spike again if other parts of China began using the same procedures as Hubei.

International health officials, notably including those in Singapore, on Wednesday questioned China’s confident predictions of the virus “peaking” and warned that in any case, peak infection rates in other countries will probably lag a few months behind China because it took longer for the epidemic to spread there.

U.S. officials on Wednesday defended the strict travel ban on Chinese nationals and foreigners who recently visited China. Anthony Fauci of the Center for Disease Control’s (CDC) National institute for Allergy and Infectious Diseases said the decision to implement travel bans “was not made lightly.” Other CDC officials said the travel restrictions gave the U.S. valuable time to prepare and avoid a “worse pandemic.”

Epidemiologists are worried about the coronavirus spreading outside China, but so far only a relative handful of infections have been reported within China’s borders.