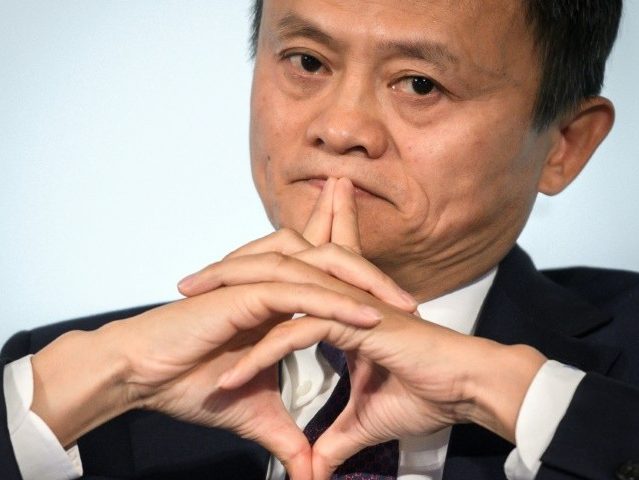 Monday’s revelation that Jack Ma, the richest businessman in China, is a card-carrying member of the Communist Party of China (CPC) scandalized the business world. China’s state-run Global Times insisted on Tuesday that membership in the Communist Party is no obstacle to vigorous capitalism.

To the extent Ma’s membership in the Party was ever really a secret, it became impossible to conceal this week because the Party Central Committee decided to give him an award as one of the 100 most important Chinese people of the past 40 years. State-run media explicitly identified him as a Party member when announcing the honor, while amusingly insisting that he is “non-partisan.”

The most important Chinese Communist before 40 years ago was indisputably Mao Tse-tung, who had a habit of murdering and imprisoning anyone who became remotely as important as he was.

China’s effort to reinvent itself as a modern, benevolent, investment-friendly industrial power has involved some delicate revisions of Mao’s legacy, essentially re-starting the historical clock with Deng Xiaoping’s market reforms in the 1980s. Mao is now revered as a visionary leader whose vision is best not discussed at length.

Jack Ma would certainly deserve a Top 100 award for his influence on China’s post-Mao history. He is worth an estimated $38.4 billion and led e-commerce giant Alibaba’s growth into a global Internet titan worth over $400 billion, making it one of the ten most valuable companies on Earth.

Ma is also very strongly supportive of Chinese Communist Party leader Xi Jinping. A major part of Chinese political mythology is the idea that super-successful independent businessmen like Ma support Xi for intellectual reasons. Formally revealing Ma’s Communist Party membership punctures an illusion that has been important to helping Western business partners swallow their reservations about Chinese authoritarianism. It spotlights a truth about Chinese “business” serving as an arm of Communist policy that globalist tycoons would rather not dwell upon.

Ma himself has described his relationship with the Chinese state by quipping, “Love them, but don’t marry them.” It turns out he had a wedding ring hidden in his pocket all along.

“It’s just another reminder that Alibaba has to be close to the CPC, and given how President Xi Jinping is pushing the party back into every aspect of business and life, it will only give ammunition to regulators who are already worried about Chinese firms,” publisher Bill Bishop of the China newsletter Sinocism told Business Insider on Monday, putting his finger on one of the concrete reasons Ma’s outing is more than a little awkward.

The Chinese editorial puts the best possible spin on the revelation by presenting it as a sign of modern China’s economic and political openness:

There was a time in China when private entrepreneurs were considered the exploiting class. They became a new social stratum after reform and opening-up. Before the 16th National Congress of the CPC in 2002, they could not join the Party. With their increasing contribution to China’s economic development, the Party adjusted the definition of the group. In an amendment to the Party Constitution made during the 16th National Congress, they were defined as an advanced element of other social strata.

Ma thanked the reform and opening-up policy for providing a great opportunity for private companies to thrive. Members of the CPC like Ma have helped promote the development of private Chinese enterprises and even the entire nation.

Alibaba issues a social responsibility report every year, which touches upon the company’s responsibility in the market, charity, public interests, environment and supervision responsibility for public opinion guidance of the internet. Ma said he wanted to “improve this society,” which fully showcases his sense of responsibility.

The paramount concerns of the free world are how Chinese authoritarianism is seeping into other societies through the Internet that made Jack Ma so much money, and how China uses economic “sharp power” to impose its speech codes and policy agenda on other nations. Even if Ma was not a member of the CPC, no one could have any illusions about Beijing’s willingness to use his corporate holdings as instruments of state policy; obedience without hesitation is literally required by Chinese law. The Global Times is correct that Ma’s Party membership does not really change anything. It just makes certain unpleasant realities more difficult for his foreign business partners to ignore.