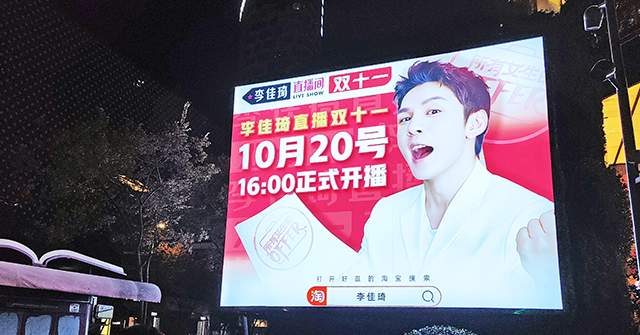 Two weeks after one of China’s most popular social media personalities, “Lipstick King” Li Jiaqi, abruptly disappeared over a minor and probably unintentional defiance of Chinese Communist Party dogma, Beijing is cracking down on other livestreamers by publishing a list of “norms” they could be instantly sent to the digital gulag for violating.

The Lipstick King saga is astonishing even by the standards of China’s ugly and deranged censorship system, because his following was so enormous – including among the Communist elite – and his transgression was so minuscule. Li was in the middle of hawking imported ice cream to his millions of followers on June 3 when one of his staffers handed him an ice-cream cake that looked like a tank.

June 3 happened to be the day before the anniversary of the 1989 Tiananmen Square massacre, an event the brutal Chinese tyranny is trying to erase from history, and the most famous image from that hideous atrocity was a lone man facing down a column of Chinese tanks.

That was enough for Chinese censors to instantly kill Li’s video stream. He has not been seen since.

Li had 64 million followers, to whom he managed to sell billions of dollars’ worth of various products over the past five years. The final public image of the fabled lipstick sales champion was him simply looking at an ice-cream cake. He could actually be in prison, or some sort of “re-education” program, since he has not been seen in public and his social media accounts have gone dark.

To date, no one has made a convincing argument that Li was attempting to send a forbidden political message with the tank cake or that he even knew the cake would be featured on his show.

Li was not at all hostile towards China’s rulers. In fact, he was touted by the Chinese Communist Party as an example of hard-working success for young people to emulate, he volunteered to help with Communist propaganda campaigns, and last year he was awarded a medal for his contributions by the city of Shanghai.

Some Chinese social media users speculated he might have been set up by a rival who knew the vast surveillance systems of the grim Communist state would pick up on the shape of a tank so close to the Tiananmen anniversary and flag Li for immediate censorship.

The Economist on Thursday looped the abrupt end of Li’s influencer career into China’s “crackdown on the fun industry,” which also includes an unexplained delay of the Chinese release of an enormously popular videogame called Diablo Immortal –apparently because the game studio’s account on Chinese social media platform Weibo made a single-sentence comment that might have been taken as insulting toward dictator Xi Jinping.

The single sentence was, “How has the bear not stepped down yet?” Xi has been sarcastically compared to the equally pudgy, but far less tyrannical, cartoon bear Winnie-the-Pooh.

Winnie-the-Pooh was unknown to the Tang dynasty; Wang’s poetry quote was supposedly an affront to Xi because the poem, entitled “The Book Burning Pit,” criticized a Tang emperor for using force to silence his critics. The irony of using force to silence Wang for daring to quote this poem was lost on the Chinese Communists.

China’s state-run Global Times reported Wednesday that the National Video and Television Administration and Ministry of Culture and Tourism are stepping up to alleviate confusion by publishing a list of 31 topics livestreamers are not allowed to discuss:

Livestreamers should not hype hot topics and sensitive issues or deliberately create “hot” public opinion, and they should not encourage users to interact in vulgar ways or incite fans to attack with rumors and commit cyberviolence.

Smearing and distorting traditional Chinese culture, historic figures and national heroes are also activities that are banned. Some livestreamers were recently found to be defaming the honors and treasures of the country in a bid to gain more exposure.

Some livestreamers have a weak legal consciousness, spread vulgar content, induce irrational consumption, and violate laws and regulations such as harming the mental health of minors, seriously disrupting the industry order, which should be regulated with strengthened supervision, the National Video and Television Administration told the media on Wednesday.

The new guidelines reportedly show livestreamers how to avoid getting censored “in a more detailed way than before.” Streamers will be required to tamp down overzealous fan culture, avoid corrupting the “values” of young people, and obtain professional certification before opining on any subject the Communist Party thinks should only be discussed by experts.

“Livestreamers who violate laws and regulations and abandon morality, causing a bad social impact, should be regularly exposed to the public, and all platforms should be guided to boycott them. They will not be allowed to get public performance opportunities, in order to prevent them from performing again on other platforms,” the Global Times demanded.