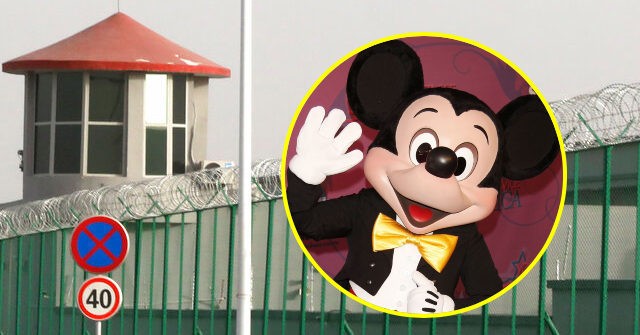 Chinese state media on Thursday howled in outrage at the latest Western media expose of human rights violations in East Turkistan, claiming the regime of concentration camps and forced labor for the Uyghur Muslims is actually a “Disney-like resort.”

The “Disney-like resort” comparison is a bit awkward because the actual Disney corporation controversially thanked Communist officials in Xinjiang for their cooperation in filming the live-action remake of Mulan in 2020. This unlovely bout of boot-licking did little to help the film in China, where it bombed among audiences who found its version of the Mulan legend facile, unconvincing, and unfaithful.

The target of the Chinese Communist Party’s umbrage was a Wednesday article by Agence France-Presse (AFP) entitled “Beijing Sells Troubled Xinjiang As a Winter Sports Paradise.” The Xinjiang Uyghur Autonomous Province (XUAR) is the official government name for East Turkistan.

The article blew a whistle on China’s effort to develop the winter sports industry in Xinjiang into a “$157 billion powerhouse,” a scheme that necessarily involves preventing visitors from noticing the brutal re-education camps and truckloads of Uyghurs getting dumped at Chinese farms and factories to work as slave labor.

China’s plan to create a winter wonderland in Xinjiang evidently involves pouring money into huge ski resorts for domestic audiences, pumping out propaganda that says none of the happy skiers and snowboarders can see any oppressed Uyghurs anywhere, and then using the sanitized image of the province to attract foreign customers.

As AFP dourly noted, China’s propagandists are even spreading lies about Xinjiang as the birthplace of skiing, a claim easily debunked by archeologists.

AFP noted the much-ballyhooed ski resorts are located in “ethnically diverse regions bordering Russia, Kazakhstan, and Mongolia,” well away from the barbed wire fences and surveillance cameras that contain the oppressed Uyghurs.

“The Chinese government has promoted tourism to Xinjiang, turning the region into a sort of Disneyland where inhabitants are stripped of their identity and opinion. Tourists come away with a curated experience staged by the state,” Maya Wang of Human Rights Watch told AFP.

The AFP piece concluded by quoting industry experts who doubted China would succeed at turning Xinjiang into a global winter sports destination, noting that aside from the human rights atrocities, the region is inaccessible, inhospitable, and saddled with poor infrastructure when compared to European resorts.

The Global Times lost its collective mind after digesting the relatively mild critique offered by AFP:

The comments that AFP made are very absurd. In terms of economic development, Xinjiang’s boost of its ice and snow economy is a standard green economic development pattern to preserve local inherent ethnic cultural characteristics, and to promote green tourism without environmental pollution. By doing so, Xinjiang can improve the well-being of local people, achieve environmental protection and economic prosperity. What’s wrong with that?

Such remarks raise questions: What kind of life do these Western journalists and the so-called rights advocates want people in Xinjiang to live? Do they hope the local residents stay in a broken economy and an impoverished condition? Or do they simply want Xinjiang to become “independent” and cede from China?

AFP’s rhetoric only demonstrates that some Western media outlets do not hope to see any good and positive change in Xinjiang. What they really care is not Xinjiang nor people of various ethnic backgrounds who live in Xinjiang. Instead, what they actually focus on is how to stir up troubles in China in general and Xinjiang in particular. And now they regard hyping Xinjiang’s so-called human rights issues as a “card” to impair China.

The Chinese Communist paper dragged out the usual “Chinese experts” to confidently declare that the world is hallucinating all those ethnic cleansing prisons and torture chairs in Xinjiang. They accused critics of callously interfering in noble China’s compassionate efforts to enrich the lives of Xinjiang residents by beefing up their tourism industry.

“Why on earth are Western media outlets so angry toward China on the Xinjiang-related affairs? The reason is simple: The rapid and enviable development of Xinjiang has made them feel deeply ashamed of their biased judgment and evil motivation,” shrieked Fudan University professor Shen Yi, slapping down the hypocrisy card China loves to play when criticized for its atrocities.