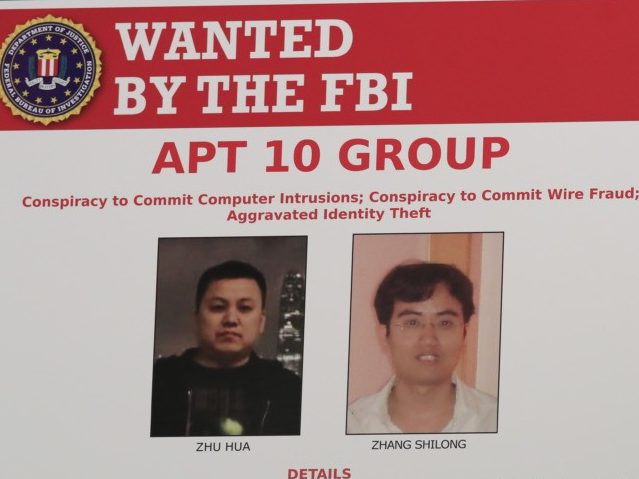 The Foreign Ministry accused the U.S. Justice Department of “fabricating” the charges against the defendants and claimed the United States is the party actually guilty of cyber-espionage.

The Justice Department linked the alleged hackers, Zhu Hua and Zhang Shilong, to a group known as Advanced Persistent Threat 10 (APT10), a team of online thieves and saboteurs active for about ten years and believed to be a unit of China’s military intelligence service. Most of the groups identified as “advanced persistent threats” are linked to either China, Russia, or North Korea.

Zhu and Zhang worked under a variety of hacker aliases including “Godkiller” and “Atreexp,” respectively, according to the Justice Department. They worked for a Chinese company called Huaying Haitai Science and Technology Development and “acted in association with the Chinese Ministry of State Security’s Tianjin State Security Bureau.”

The two were accused of running a massive operation to steal “intellectual property and confidential business and technological information,” targeting over 45 companies across the United States as well as government agencies, prominently including the U.S. Navy.

One of their heists allegedly stole personal information, including Social Security numbers, from over 100,000 Navy personnel. They penetrated NASA’s Jet Propulsion Laboratory and the Energy Department’s Lawrence Berkeley National Laboratory, stealing data that covered an astonishing range of subjects from aviation to medicine and energy production.

The hackers also hit computer systems belonging to U.S. allies including Canada, France, Germany, Japan, and the United Kingdom. The U.S. Justice Department action was coordinated with 11 other nations in total.

“This is outright cheating and theft, and it gives China an unfair advantage at the expense of law-abiding businesses and countries that follow the international rules in return for the privilege of participating in the global economic system,” Rosenstein said.

“It is galling that American companies and government agencies spent years of research and countless dollars to develop their intellectual property, while the defendants simply stole it and got it for free. As a nation, we cannot, and will not, allow such brazen thievery to go unchecked,” declared U.S. Attorney Geoffrey S. Berman.

“Healthy competition is good for the global economy, but criminal conduct is not,” said FBI Director Christopher Wray, anticipating the objection from China that America is only pretending to crack down on cyber-espionage to shield U.S. companies from competition.

“This is conduct that hurts American businesses, American jobs, and American consumers. No country should be able to flout the rule of law, so we’re going to keep calling out this behavior for what it is: illegal, unethical, and unfair,” Wray promised.

“China will find it difficult to pretend that it is not responsible for this action,” Deputy AG Rosenstein predicted at a press conference announcing the indictments.

Secretary of State Mike Pompeo and Secretary of Homeland Security Kirstjen Nielsen contributed a joint statement describing the alleged hacking activity as a “very real threat to the economic competitiveness of companies in the United States and around the globe.”

“We strongly urge China to abide by its commitment to act responsibly in cyberspace and reiterate that the United States will take appropriate measures to defend our interests,” they said.

China reacted much as the U.S. officials expected, as related by the South China Morning Post:

In a statement on Friday, the foreign ministry in Beijing responded to US legal action against two Chinese alleged hackers and said China would take “necessary steps to resolutely protect its cybersecurity and interest.”

“The United States fabricated facts,” it said. “The U.S. made false accusations against the Chinese side on the grounds of so-called cyber stealing. Such a move is a serious violation of the basic norms of international relations and will seriously damage Sino-U.S. cooperation.”

“We urge the U.S. to immediately correct its wrong practices, stop attacking the Chinese side with cybersecurity issues.”

The Foreign Ministry claimed the United States is the real cyber-espionage culprit, saying “it is no longer a secret that the U.S. conducts large-scale monitoring campaigns watching foreign governments, enterprises, and individuals.”

“China firmly preserves cybersecurity, always opposing and cracking down on any forms of cyber theft. The Chinese government has never participated in or supported any theft of trade secrets,” insisted Foreign Ministry spokeswoman Hua Chunying.