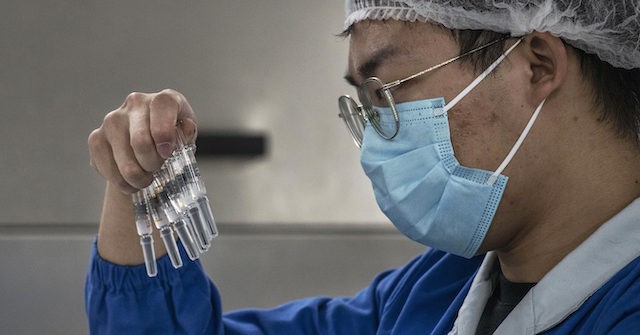 The Phase I clinical trial, published by the Lancet, was preliminary and very small – it was conducted in December 2020 and involved only 120 people, and it tested antibody levels in the body, not actual exposure to Chinese coronavirus and its variants.

The trial found seroconversion rates of 80 to 95 percent in test subjects within 15 to 30 days after a second injection of the vaccine, called ARCoVAX.

mRNA vaccines are supposed to teach the human body how to manufacture antibodies to fight off an infection without actually introducing virus cells into the bloodstream. China’s previous vaccines, such as Sinovac, use the older inactivated-virus technique of injecting the patient with dead or neutralized virus cells to induce the desired antibody response.

China claimed extremely high rates of effectiveness for its older products, but they proved highly unreliable when used anywhere the Chinese Communist Party could not control the flow of information about their effectiveness. Some third-party countries eventually began recommending Western products for “booster shots” after coronavirus infections surged among people who were inoculated with Chinese vaccines.

Last summer, Chinese scientists claimed their inactivated-virus vaccines should be more effective than mRNA technology. In December 2021, they claimed a third injection of their old vaccines was among the most effective defenses in the world against the Omicron variant. But on Wednesday, the Global Times quoted Chinese scientists who said mastering mRNA technology is “very important for China, not only to control the COVID pandemic but as treatment in cancer and rare diseases.”

According to the Global Times, the Lancet study demonstrated ARCoVAX has “good safety levels,” with “no serious adverse reactions” reported – aside from a bit of “pain, itch and redness in the injection site, fever, headache, fatigue or malaise, muscle and joint pain, diarrhea, and chills,” of mild to moderate severity.

Later in the article, the authors admitted those fevers might be a problem:

In comparison, the incidence of grade 3 fever in the same 30 micrograms group in adults aged 18 to 55 years was zero in the US, 8 percent in Germany and 17 percent in China.

CNN reported in December that China seemed on the verge of authorizing Western mRNA vaccines during last summer’s Delta variant outbreak, but mysteriously delayed regulatory approval, remaining tight-lipped even when another outbreak erupted on the eve of the Beijing Winter Olympics. Chinese officials have also refused to discuss how effective any of their older vaccine products are against the Omicron variant.

The implication is that China is reluctant to admit its vaccines are inferior, even at the risk of coronavirus cases spreading unnecessarily through its population, and looks to be gambling on domestic mRNA products like ARCoVAX coming to the market soon. Production facilities for ARCoVAX are reportedly ready to begin pumping out 200 million doses a year, as soon as approval is given, while established companies like the state-owned Sinopharm are working on mRNA products as well.