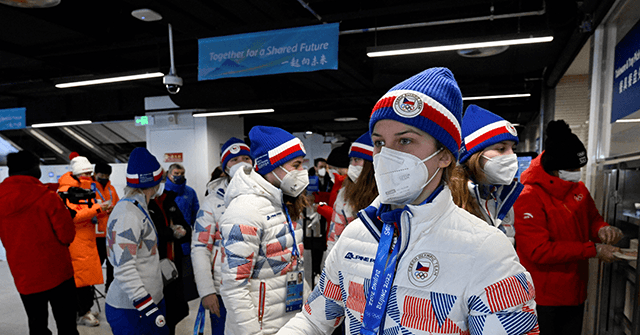 Chinese state media on Thursday tried to counter widespread reports of poor-quality food and borderline starvation among foreign athletes at the Beijing Winter Olympic village by claiming the visitors were actually enjoying a “banquet of delicacies” to go along with the corrupt and morally compromised “sports feast” of the Genocide Games.

Foreign athletes used press conferences and social media this week to blast the “extremely questionable” catering, as German Alpine skiing coach Christian Schwaiger put it. Some athletes resorted to bringing in their own food, while others complained the meals provided by Communist China were so sparse and stale that they were visibly losing weight. Conditions at the coronavirus “isolation facilities” in Beijing were horrid enough to reduce Olympians to tears.

“I only sleep all day because I don’t even have the strength to get out of bed. I only eat three handfuls of pasta a day because it’s just impossible to eat the rest of the food. My stomach hurts, I’m very pale, and I have huge black circles around my eyes. I want all this to end. I cry every day. I’m very tired,” Russian biathlete Valeria Vasnetsova complained on Instagram.

She says that the same meal has been served at the Winter Olympics in Beijing for “breakfast, lunch, and dinner for five days already.” pic.twitter.com/AspgWEqutb

The International Olympic Committee (IOC), which is generally very reluctant to criticize the Chinese Communist government, admitted it has received complaints about “food temperature, variety, and portion size” from staffers and athletes.

China’s state-run Global Times on Thursday insisted all of these complaints were hysterical delusions and the athletes were actually fattening up on the “delicious food” Beijing is renowned for.

Naturally, American defector Eileen Gu was trotted out to shore up the latest blast of Communist propaganda:

It is not only the athletes’ performances that are trending on social media, but also their enthusiasm and love of Chinese food. Videos of China’s 18-year-old freestyle skier Gu Ailing Eileen, who won a gold medal on Tuesday, eating a steamed bun went viral, as well as Gu’s previous videos of her gobbling dumplings.

Chinese netizens were also amazed by the craze for steamed buns by Jenise Spiteri, the first-ever snowboarder to represent the European island of Malta. She told media after competition that she eats six steamed buns per day, and she even popped one in her mouth when she got to the base of Genting Snow Park and waited for her score.

“Even Thomas Bach, the president of the International Olympic Committee, said that he ate many dumplings and grew fatter when he showed up at the Main Media Center of the Winter Olympics on Wednesday. He also said that he prefers spicier food,” the Global Times burbled.

Contrary to all those reports and photographic evidence of substandard meals and malnutrition, the Chinese Communist paper insisted all of the Olympic athletes are feasting upon “lamb, beef, roast duck, and dumplings.”

Olympic visitors are supposedly receiving instruction from their hosts in “how to eat Chinese food,” which apparently involves learning how to imagine a plastic tray sparsely loaded with tiny lumps of stale garbage is actually overflowing with lamb, beef, roast duck, and dumplings.