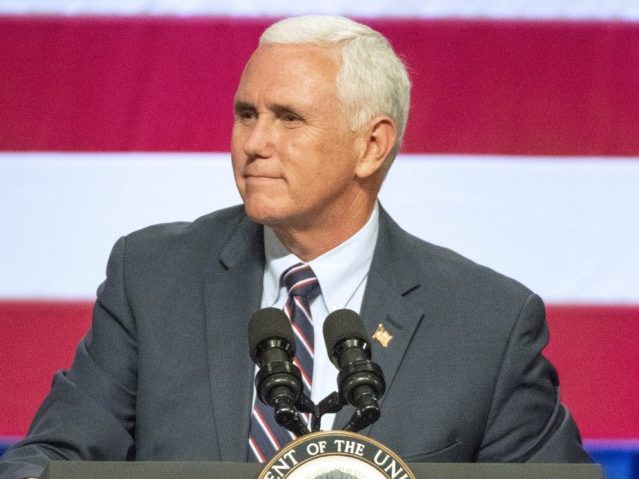 China warned the U.S. and other “outside powers” to refrain from disrupting China’s plans to draft a code of conduct for the South China Sea.

China’s state-run Global Times muttered about Pence stirring up trouble at the ASEAN summit when it kicks off on Tuesday:

“The South China Sea situation has been stable, but since US Vice President Mike Pence is expected to attend the summit, the topic might be put forward,” Li Kaisheng, a research fellow at the Shanghai Academy of Social Sciences, told the Global Times on Monday.

“Currently the issue is being influenced by outside factors, such as the US, which sees the South China Sea as a point to balance China’s power.”

Li forecasts that during the 21st ASEAN-China Summit on Wednesday, China and the US will show their stances on the South China Sea issue.

Pence on Sunday assured reporters President Donald Trump was not snubbing ASEAN and APEC by missing the meetings, the first time America’s president has not attended since President Barack Obama skipped them in 2013.

The Associated Press nevertheless heard some grumbling about Trump sending Pence in his place:

The president’s absence leaves Pence to fill a void that’s grown wider under Trump, who’s pulled out of a major Pacific trade deal, slapped tariffs on allies, and intensified a diplomatic and economic battle with China.

Pence will need to make significant announcements to overcome growing skepticism about the Trump administration’s commitment to Asia, said Anthony Nelson, director of the East Asia and Pacific practice at the Albright Stonebridge Group in Washington.

“There has been disappointment that President Trump did not commit to coming,” said Nelson, a former director of the U.S.-ASEAN Business Council. “Pence can try to say the right things, but without anything concrete that he can offer, it’s hard to think it won’t be overshadowed by what everyone knows the administration is thinking.”

Pence has the president’s full backing and plans to announce several new initiatives during his weeklong trip, according to a senior administration official. They include bilateral, trilateral and possibly larger initiatives that cover the digital economy, energy and infrastructure, said the official, who briefed reporters on condition of anonymity.

As the top representative from the world’s largest economy, Pence will have an audience with several world leaders interested in hearing more about U.S. policy. The vice president begins his trip with meetings and a press conference with Japanese Prime Minister Shinzo Abe in Tokyo on Tuesday. Pence is also scheduled to have meetings with the prime ministers of Singapore, India, Australia and Papua New Guinea.

The AP observed that while Pence is normally a reassuring and businesslike presence, he has been outspokenly critical of China over the past month. The vice president’s office said he plans to “deliver the message that authoritarianism, aggression, and the disregard for other nations’ sovereignty by any nation in the Indo-Pacific will not be tolerated by the United States.”

Reuters wondered if Pence would have a significant encounter with Chinese Premier Li Keqiang at the ASEAN summit, possibly foreshadowing President Trump’s meeting with Chinese Communist Party leader Xi Jinping at the G-20 summit in Buenos Aires later this month.

Li will seek to build support for China’s Regional Comprehensive Economic Partnership, a multilateral free trade deal that would include all of the Asian economic superpowers but not the United States. Reuters also expected Li to push China’s proposal for a South China Sea code of conduct that would ratify Beijing’s expansive territorial claims.

Another matter of keen interest to ASEAN members will be if Pence discusses U.S. plans to compete with China’s vast Belt and Road infrastructure project. Congress created the U.S. International Development Finance Corporation (USIDFC) with a $60 billion budget to compete against China’s “debt trap” loans to developing nations, as Pence dubbed them in October to China’s great irritation. Southeast Asian nations will be keenly interested to see how much money the U.S. actually puts on the table for infrastructure development and what kind of restrictions come with the money.

Pence’s trip to Asia included a Monday meeting with Japanese Prime Minister Shinzo Abe in Tokyo. Pence described Japan as an “indispensable trade partner for the United States,” but he said the U.S. “has had a trade imbalance with Japan for too long.”

The Trump administration plans to resolve this issue with what Pence has described as a “historic” bilateral trade agreement with Japan. Pence also urged the Japanese to invest more in their own defense and received reassurances from Abe that Japan remains fully committed to denuclearizing North Korea. Abe said his country is hoping to improve relations with China, while Pence stressed the importance of working together against China’s growing regional influence.