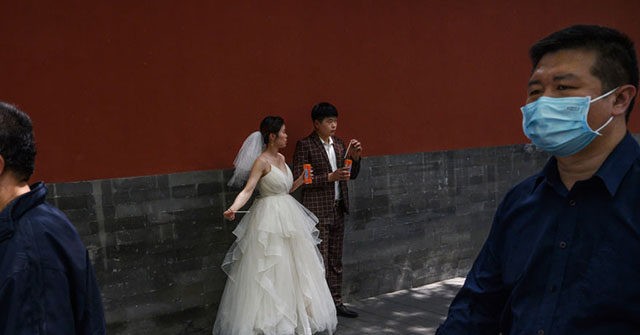 Rural governments in China are banning funerals and weddings to contain a recent spread of the Chinese coronavirus across northern provinces including Hebei, which surrounds the national capital, Beijing, the South China Morning Post reported Tuesday.

“Outlying villages around the two cities account for around 70 percent of cases in the latest outbreak,” according to the report.

“Over 70 percent of those infected in the city [Shijiazhuang] are farmers, the majority of whom are from middle-aged and elderly groups,” Hebei health official Li Qi said at a January 12 press conference.

In northern Shanxi province, located west of Hebei, the city of Jinzhong announced “strict controls on gatherings” on January 11, “with weddings, funerals, public ceremonies, performances and other events banned after it recorded two asymptomatic [coronavirus] cases, both from Hebei,” according to the SCMP.

“While respiratory infectious diseases are easier to spread in winter, intensive social events such as weddings and funerals in villages accelerated the [Chinese coronavirus] transmissions,” Feng Zijian, deputy director of the Chinese Center for Disease Control and Prevention told Xinhua, China’s state news agency, on Monday.

Funerals and weddings in rural China can involve hundreds, or even thousands, of guests.

“They are an important element of traditional Chinese culture and low attendances involve a huge loss of face for the families,” the SCMP noted on Monday.

“Funerals and weddings are just social customs. What the government should do is to improve medical services and awareness in rural areas, instead of simply calling the events to a halt,” a user of the Chinese social media platform Weibo wrote this week of the gathering ban, according to the newspaper.

Roughly 600 million people currently reside in China’s rural areas. The state government has seemingly underestimated or even ignored the risk of the Chinese coronavirus spreading to China’s countryside, according to Wu Hao, a member of a specialist team from China’s National Health Commission.

“The Hebei outbreak rang an alarm bell,” Wu told Xinhua on Monday, adding that “poor public health awareness, mass gatherings and failures at a grass-roots level were to blame for the outbreaks” in rural China.

China’s National Health Commission reported 55 new coronavirus cases on Monday. Of the new infections, 40 were recorded in Hebei province, one was documented in Beijing, and another case was found in northeastern Heilongjiang province, which borders Russia.