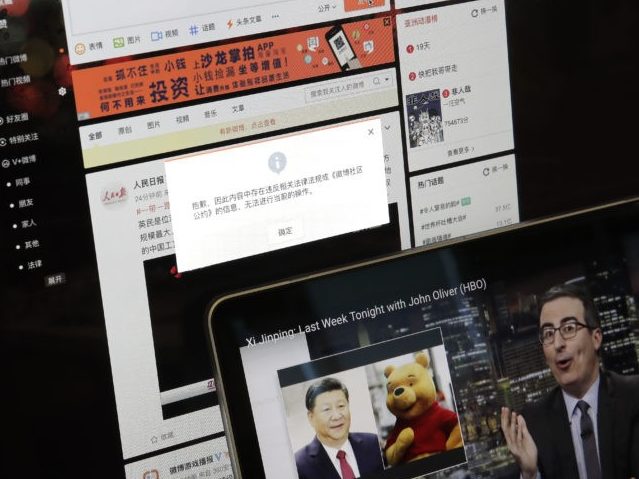 The Chinese Communist Party wiped out 10,000 accounts over the past three weeks across multiple popular social media services to suppress dissent and enforce the Communist Party line, the South China Morning Post reported on Tuesday.

The affected accounts reportedly ranged from popular celebrities to average citizens across all of the top Chinese social media platforms, including Weibo, Tencent, NetEase, and Baidu, along with news aggregation sites like Toutiao and Sohu.

China’s Cyberspace Administration said the banned accounts “trampled on the dignity of laws and regulations and damaged the ecology of online public opinion” by “spreading harmful political information, maliciously tampering with the history of the Communist Party and smearing the reputation of heroes and China.”

“Some challenged the moral bottom line of society and damaged the healthy growth of the majority of youngsters by spreading vulgar pornography and violating good social customs,” the censorship agency added.

Weibo and WeChat have been trying to play ball with Beijing by banning some hugely popular accounts on their own because the users were allegedly spreading “harmful political information” and pornography. Apparently, those efforts were not good enough because representatives from the two companies were summoned by the Cyberspace Administration on Monday to give them “serious warnings” about their “irresponsibility and lax management.”

“Except for some who deserved the axe, many professional we-media people have been working for years and made a living on it, yet they were axed without any warning or notice. Is this really happening in 2018?” one said.

Another said: “Shutting down these accounts will not stop people from thinking or us followers from getting information. It will only prompt us to get information from more sources. I believe these accounts holders were doing something meaningful.”

“It was really hard to take when my previous Weibo account for eight years was shut down and all my postings were gone. The winter has come and let’s be careful about what we do and say,” a third user said.

The New York Times found Chinese censors swarming all over the annual World Internet Conference near Shanghai last week, while big Western tech executives took a pass. Chinese “private enterprises” attending the conference eagerly “showed off the ways in which they increasingly support and work with the government.” Executives from social media platforms and software providers were among them.

China’s top propaganda minister attended the World Internet Conference to celebrate the “China model” of internet control. He touted “cyber sovereignty” and the right of individual countries to choose their own “development path for cyberspace.”

Bloomberg News looked on this year’s World Internet Conference as a sign the Internet is splitting into Chinese and American spheres of influence, as predicted by Google’s Eric Schmidt:

China’s regulators have trumpeted its concept of “cyber-sovereignty” since the inaugural conference in 2014. But the dichotomy between the American and Chinese tech industries has never attracted as much scrutiny as today, when the world’s two richest countries are butting heads in a conflict that may shape a new world order. As U.S. icons like Google and Facebook come under fire for privacy violations and enabling hate speech, their Chinese counterparts are touting theirs as the superior model: one geared toward the interests of the state.

“The Chinese economy is a vast ocean. Storms cannot disrupt it,” [Tencent Holdings Chairman Ma Huateng], who is also known as Pony, told delegates. “This ocean holds massive market potential and also great room for innovation. I believe, this isn’t just a development opportunity for the internet industry, but for all sectors. It’s not just an opportunity for China, but for the entire world.”

The Chinese approach creates what Gary Rieschel of Qiming Venture Partners described to Bloomberg as a “climate of fear,” because the Chinese government can slam any company sailing upon the “vast ocean” of its marketplace with enormous regulatory costs at any time.