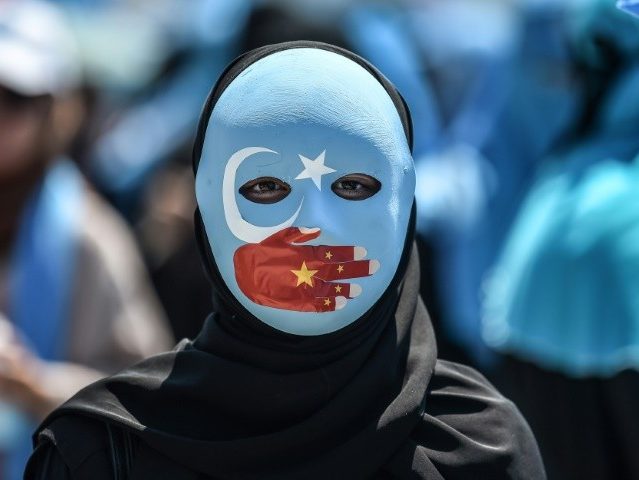 China’s state-run Global Times on Tuesday pushed back against complaints about China’s abuse of the Uighur Muslim minority in Xinjiang province, accusing a Uighur woman of lying about torture and murder at the gigantic internment camps much of the Uighur population has been herded into.

The woman in question is 29-year-old Mihrigul Tursun. She gave a press conference in Washington on Monday in which she described being “interrogated for four days in a row without sleep, had her hair shaved and was subjected to an intrusive medical examination following her second arrest in China in 2017.” Then she was arrested again and treated even worse.

“I thought that I would rather die than go through this torture and begged them to kill me,” Tursun told the National Press Club.

Tursun said her internment nightmare began when she returned to China with her husband and three children after studying in Egypt. She was thrown into detention immediately upon arrival and separated from her children, one of whom died in her absence. She claims all of her children were subjected to surgical procedures without her knowledge or consent.

The Associated Press described what happened after the Chinese arrested her for the third time:

Several months later, she was detained a third time and spent three months in a cramped, suffocating prison cell with 60 other women, having to sleep in turns, use the toilet in front of security cameras and sing songs praising China’s Communist Party. Tursun said she and other inmates were forced to take unknown medication, including pills that made them faint and a white liquid that caused bleeding in some women and loss of menstruation in others. Tursun said nine women from her cell died during her three months there.

One day, Tursun recalled, she was led into a room and placed in a high chair, and her legs and arms were locked in place.

“The authorities put a helmet-like thing on my head, and each time I was electrocuted, my whole body would shake violently and I would feel the pain in my veins,” Tursun said in a statement read by a translator.

“I don’t remember the rest. White foam came out of my mouth, and I began to lose consciousness,” Tursun said. “The last word I heard them saying is that you being an Uighur is a crime.”

Tursun escaped from China’s grasp by getting in touch with American officials after she was allowed to return to Egypt. She was presumably granted asylum, as the AP reports she “came to the United States and settled in Virginia” in September.

The Chinese embassy in Washington refused to comment on Tursun’s testimony, but the Global Times was not so reticent. On Tuesday, the Chinese Communist media organ flatly accused Tursun of lying, because a few of its reporters visited the internment camps and found them filled with shiny, happy people who were busy getting their minds right:

Global Times reporters recently visited two vocational education and training centers in Xinjiang. What they saw was totally different from the woman’s depiction. Rather than prisons, the centers are schools that help trainees rid themselves of extreme thoughts and master vocational skills needed to return to society. Even a real prison in China is not like Tursun portrayed.

It’s startling that no reporters on the scene question the stories fabricated by Tursun. If these so-called “re-education camps” were so horrible, how did she escape?

If the Uighur camps are so wonderful, why will China not allow international observers to inspect them? Why did Beijing deny the very existence of the camps until satellite photos made that impossible?

The Global Times fulminated that Tursun’s press conference was an excuse for the West to wallow in its anti-China bias, because “demonizing China is an industrial chain in Western media.”

“Defining what China is doing from an extreme perspective or using interviewees to manipulate facts is all possible. Few will correct the wrong in the current Western society,” the op-ed complained.

What would really go a long way toward “correcting the wrong” would be allowing international observers to visit the Xinjiang camps and partake of all the vocational training and upbeat community-building exercises that supposedly occur there, but again, that seems to be off the table for some reason.

Later in its rant, the Global Times admitted China might be a wee bit more harsh with dissidents than soft-bellied Western societies are comfortable with, but then it slapped down the “respect our unique culture” card:

Most of the Western accusations of Chinese mainland violations of human rights concentrate on dissidents in China, governance of ethnic minorities in border areas, a few people who illegally possess Chinese and other nationalities or Chinese who hold a foreign passport but still live in China. But the mainland is pursuing its own justified goals: safeguarding social order and stability, preventing national split and terrorism activities and securing national security.

China’s governance is based on goodwill. But some Westerners interfere because of the difference between China and the West in governance.

Although not all of the West’s accusations against China’s human rights are malicious, they are biased, rude and impatient.

China has maintained peace for 30 years, but major Western countries suffered from many wars in the three decades. China concentrated most of its efforts on improving people’s life.

Instead of rejecting a Western human rights concept, China critically assimilates it according to its national situation. China has been reiterating that restoring Xinjiang’s peace and stability is the top priority of human rights. Few Westerners accept such a plain truth.

The audience for Mihrigul Tursun’s presentation certainly did not seem inclined to accept China stuffing two million people into “re-education centers.” At Monday’s National Press Club meeting, an international assembly of 278 scholars issued a statement calling on China to shut down the Xinjiang camps, urging the United Nations to investigate them further, and advising free countries to expedite requests for asylum from Uighurs.

“This situation must be addressed to prevent setting negative future precedents regarding the acceptability of any state’s complete repression of a segment of its population, especially on the basis of ethnicity or religion,” the statement said.

“Can you imagine (if) some American officials in charge of the fight against [Islamic State] would be sanctioned?” Cui said, adding that “if such actions are taken, we have to retaliate.”

Cui said that while the United States was using missiles and drones to kill terrorists, “we are trying to re-educate most of them, trying to turn them into normal persons [who] can go back to normal life.”

“We’ll see what will happen. We will do everything in proportion,” he said, responding to a question on how China would retaliate against possible US sanctions on Chen.

A bipartisan group of U.S. senators is urging the Trump administration to impose sanctions against Chinese officials under the Global Magnitsky Act, which was also recently invoked to sanction Saudi Arabian officials linked to the murder of Jamal Khashoggi. One of the officials listed as a possible sanctions target is Xinjiang Party Secretary Chen Quanguo, a high-ranking member of the Chinese Politburo.