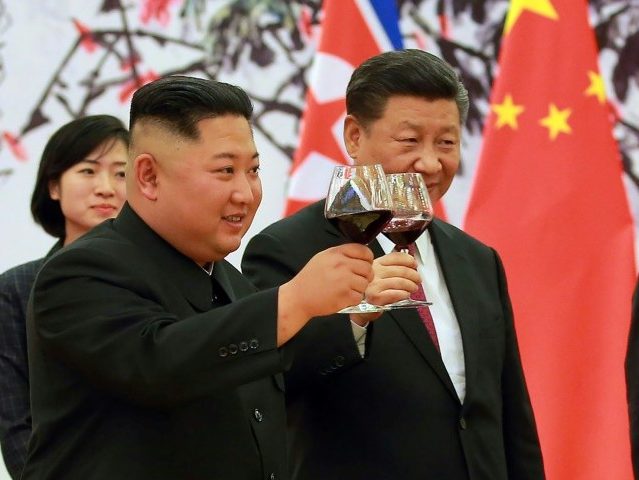 The Chinese government and its carefully controlled media professed extreme pleasure with the summit between South Korean President Moon Jae-in and North Korean dictator Kim Jong-un Wednesday, lavishing praise on the North Korean leader and gushing over the glimpse of North Korea’s “modern” and upscale capital city of Pyongyang.

China’s Global Times on Wednesday quoted North Korea’s even more tightly controlled media to describe the summit as an “in-depth exchange of opinions on various issues arising in further accelerating the development of the north-south relations by honestly implementing the Panmunjom declaration in an all-round manner.”

North Korean media added that Moon and Kim “highly appreciated the present state of the North-South relations going forward on good terms after the previous two inter-Korea summits earlier this year, and had a frank and candid conversation over important matters of mutual concern.”

The Global Times was bowled over by the views of Pyongyang afforded by President Moon’s visit, although it tactfully noted that not much of the rest of North Korea resembles the playground city of its political elite:

Several salespersons at Pyongyang’s Ragwon Department Store were watching the news reporting on North Korean leader Kim Jong-un on the country’s 70th anniversary of its founding. The television they were watching is a Panasonic 60-inch LCD TV, with an “uncertain price,” a salesman told the Global Times.

The store is an elegant one in the city. Travel guidebook publisher Lonely Planet depicts it as “a department store full of imported goods that’s popular with the Pyongyang elite.” Selling products like Panasonic televisions and Merries baby diapers, it may create an illusion for visitors that they are shopping in other big cities.

Even though the reporting trip was during North Korea’s national holiday, the store was not crowded. On the shelves in the supermarket, there were bottles of water produced in November 2017. The Global Times reporter took several bottles of soft drinks, each labeled 140 North Korean Won, to the cashier’s desk. After the cashier tapped on a calculator, she smiled and asked the reporter to give more. 5,000 won is not enough.

As North Koreans cheerfully explained to Chinese interviewers, they do not need money because everything important in the worker’s paradise is free:

Even though the country might be known for conservative people, poverty and low levels of education, there are expensive restaurants and the city is extremely clean.

In Pyongyang’s Kim Jong-suk Silk Mill, workers were passionate about completing “production tasks.” A 54-year-old worker told the Global Times that she was never concerned about money. “We are not like those capitalist countries, in which people cannot live without money.”

Nowadays, a vegetable farm in the Sadong district of Pyongyang is feeding the capital city with vegetables. The farm is a pilot model for agriculture reform in North Korea. In the new system, 70 percent of agricultural production is purchased by the government, and 30 percent is distributed to farmers, which has largely stimulated efficiency.

“In 2017 the average income was 800,000 to 900,000 won,” said the head of the farm, surnamed Lee. “We don’t have many places to spend money, because the medical care is free, school is free and even the housing is free. So we only use the money to buy some necessities.”

Radio Free Asia noted that while President Moon and his entourage were welcomed in Pyongyang, North Koreans were placed under “unusually severe” restrictions and blocked from entering the capital city during its moment in the international spotlight.

“In the past, even if access to the capital was restricted, we could enter the city by bribing train security officers and soldiers at inspection points, but that won’t work this time. It’s impossible to get anywhere near the city, as the atmosphere there is very strict,” one North Korean grumbled, calling the summit lockdown the most severe security atmosphere ever imposed on Pyongyang.

RFA reported that North Korean soldiers were instructed to wear civilian clothes if they had to walk the streets of Pyongyang during the summit, while civilians were told to remain alert for any “nonsocialist phenomena” that might break out.

The overall tenor of the report on Pyongyang is that North Koreans expect sanctions to evaporate soon and their economy to become more open to trade, at least with neighbors like China, Russia, and South Korea, putting prosperity right around the corner.

The official response from Beijing was applause for the summit and hope for further diplomatic progress on the Korean peninsula. The U.S. State Department offered assurances that China remains on board with “the common objective of denuclearization and the path forward on achieving that objective.”