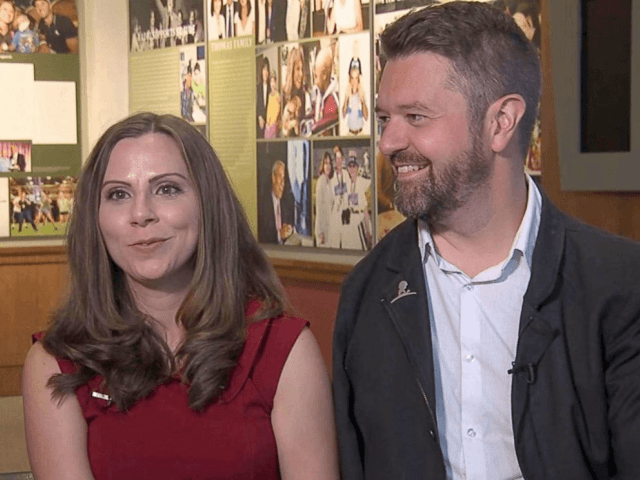 On September 1, Joel Alsup and Lindsey Wilkerson tied the knot in the place where they met as children: St. Jude’s Children’s Research Hospital.

More than 25 years after they first met, on the first day of National Childhood Cancer Awareness Month, Alsup and Wilkerson made their vows to one another in the very hospital where they battled the horrific disease as children; Joel with osteosarcoma, and Lindsey facing acute lymphoblastic leukemia.

Then 7-year-old Alsup had to have his arm amputated before he was cancer-free. “When I met this guy, when I was in treatment, I admired him,” Wilkerson said. “I looked up to him, I thought he was such an incredible person. We grew in our friendship over the years.”

The pair lost touch when they went to separate colleges, but reunited after accepting jobs at St. Jude’s. When Wilkerson spotted Alsup on her rounds, their romance picked up where it had left off. “I was finally brave enough to tell her that I liked her, not only that I loved her,” Alsup told WREG 3. “Luckily she felt the same way.”

Other former patients served as the couple’s wedding party, and they dedicated their lives to one another before Chaplain Brent Powell, with whom Alsup had become acquainted as a child during his stay in the hospital.

“I could have never fathomed that I would be sitting here today at [Joel’s] side as his wife, having the privilege to be married on the grounds of the place that saved our lives,” Wilkerson said.

“Now it’s our turn to pass that gift on,” she said. The couple is trying to raise awareness about the St. Jude Walk/Ride, which takes place on Saturday, September 29.