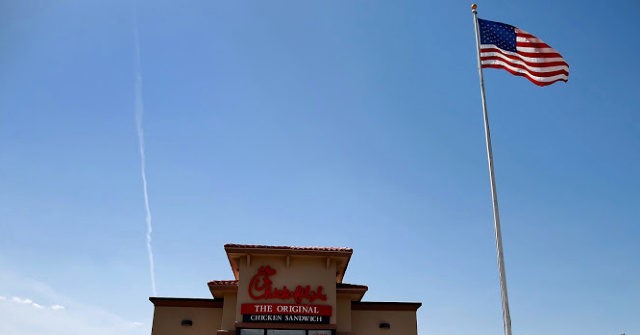 A fast-thinking Chick-fil-A employee jumped out of the drive-thru window to save a child who was choking in a car.

Logan Simmons was working in the drive-thru at the restaurant’s location in Flowery Branch, Georgia, when he heard a distraught mother yelling for help outside.

A young @ChickfilA worker jumped into action when a boy was choking in a car. https://t.co/iFN0IUDyvH TONIGHT AT 11: What the teen told @JustinWilfonWSB about the terrifying moments. pic.twitter.com/KKTlljgW72

Restaurant surveillance footage shows Simmons leaping through the open window and rushing to rescue the 6-year-old boy whose seatbelt was wrapped around his neck.

“I just jumped out the window and ran straight down to the car,” he said. “It was the quickest option. It was right there and I saw the other car right there.”

Simmons said the child was “turning red and losing pigmentation in his face,” so he used his pocketknife to free the boy.

“I’m still kind of shocked right now myself that all this has happened,” the hero teenager told reporters after the incident.

Simmons’ mother said her son acted as if nothing much had happened when he returned home from work that day.

“He’d been home for a couple of hours and he said nonchalantly, ‘I saved a kid’s life today,’ and I was like ‘What?’”

She said she was “amazed” at her son’s actions, and added that she would have panicked had it been her in the situation.

“I’d be running around going,  ‘Oh my gosh! What do we do?’” Simmons commented.

Simmons received a call from the boy’s mother later that day to thank him for saving her child’s life.

“I do feel like a hero,” he said after receiving the phone call.

Another Chick-fil-A employee in Austin, Texas was hailed a hero last year after saving a man who was choking as he stood inside the restaurant.