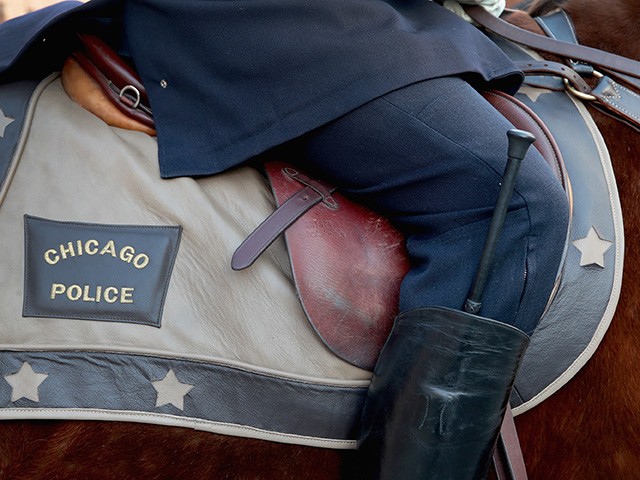 A trio of Chicago residents notified police of anti-semitic chalk markings discovered on their properties since Friday, according to reports.

One resident from the city’s Uptown neighborhood told law enforcement that they witnessed a man on Friday afternoon defacing a pillar outside his home located in the 800 block of West Hutchinson with a swastika. The resident said the suspect appeared to be Hispanic or Caucasian and was walking a “light colored dog.”

Police later found additional chalk scribblings that read “CIA” and “CIA FU,” authorities say. At least one of the incidents is currently being investigated as a hate crime.

“At 9:30 on Saturday morning, a resident of the 800 block of West Junior Terrace reported finding swastikas drawn in chalk a fence outside their home. Investigators were searching the area for surveillance cameras that may have captured images of the offender,” CWB Chigaco reports.

The Chicago probe comes as the NYPD investigates at least three anti-Semitic vandalism incidents that have occurred in the past week. Last Wednesday, multiple swastikas were found drawn on a black garage door in Brooklyn Heights Wednesday. Sandy Maltzman, a senior producer for CNBC, tweeted a photo of the vandalism, writing: “Today was the day I woke up to swastikas on my beautiful block in Brooklyn Heights. Praying they’re gone before all our children flood the street to celebrate Halloween tonight.” The NYPD is looking to interview two men suspected of defacing the Brooklyn Heights property last week.

On Friday, police arrested James Polite, a 26-year-old former Democrat activist and New York City Council intern, for charges stemming the vandalism of Union Temple in Prospect Heights. Polite is suspected of writing “Hilter” and “Die Jew rats, we are here!” on the synagogue.

As Breitbart News reported earlier Monday, the NYPD is investigating a group of young vandals after a metal pipe was hurled through a window of the Volkan synagogue in Brooklyn Saturday.

Authorities have not commented on whether the incident in both cities are relations.