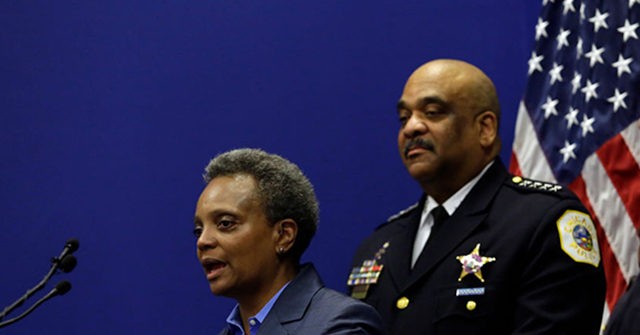 Chicago’s recently elected mayor, Lori Lightfoot, has fired the Windy City’s top cop, Superintendent Eddie Johnson, over the “intolerable lies” she says he told her about what caused him to be found asleep at the wheel in October.

Lightfoot fired Johnson on Monday despite his announcement late last month that he intended to resign by the end of the year.

Johnson landed in hot water after being found by officers asleep at the wheel of his car on the side of the road on October 17 when police responded to a 911 call at around 12:30 a.m.

Johnson publicly blamed his drowsiness on medication he was taking along with a “few” drinks he had at dinner that night. After the news of the incident broke, the 31-year veteran of the Chicago Police Department (CPD) announced that he would retire at the end of December.

“It is time for someone else to pin these four stars to their shoulders,” Johnson said at a November 7 press conference. “These stars can sometimes feel like carrying the weight of the world, and I’m confident I leave CPD in a better place than when I became superintendent.”

But while Lightfoot allowed Johnson to set up a graceful exit last month, she abruptly reversed course this week by outright fringing him “for cause.”

“Mr. Johnson was intentionally dishonest with me and communicated a narrative replete with false statements regarding material aspects of the incident that happened in the early morning hours of October 17,” Lightfoot said on Monday morning according to the Chicago Tribune.

“Had I known all the facts at the time, I would have relieved him of his duties as superintendent then and there,” the mayor added.

“The old Chicago way must give way to the new reality. There must be no mistake about the message I am sending today,” she concluded.

My full statement from today’s announcement regarding Eddie Johnson. pic.twitter.com/7eMHyYm6eN

Lightfoot refused to lay out all the lies she says Johnson told her, though, saying only that it is not her place to clear the air.

“At some point, the report may become public. I do not feel that it’s appropriate for his wife or children to do so at this time,” the mayor insisted.

Last month, Lightfoot appointed former Los Angeles Police Chief Charlie Beck to take over the department while the city looked for a permanent replacement. Beck is now set to take over this week in light of Johnson’s sudden exit.