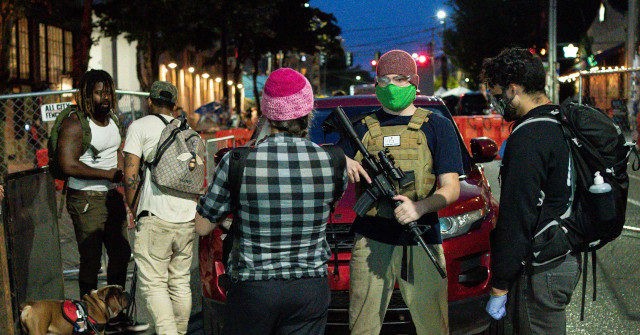 Property owners near the Capitol Hill Autonomous Zone (CHAZ) in Seattle, Washington, are reportedly hiring private security firms to protect themselves in the wake of the Black Lives Matter activists’ occupation of six blocks of the city.

[S]ecurity companies also reported an uptick in protection requests from businesses of all sizes and residential complexes downtown, in Capitol Hill, Pioneer Square and even Redmond, West Seattle and Tukwila. Fueling the surge, they say, are fears police consumed with controlling protests won’t prioritize property protection.

The push toward private security began during the coronavirus pandemic closures, with businesses fearing break-ins on abandoned streets. It continued even as businesses reopened, with staff sometimes encountering unusually hostile customers seemingly stressed out by the pandemic. Then, things really took off once the protests began.

Seattle Police Chief Carmen Best said Thursday that law enforcement has bene unable to respond to “rapes, robberies, and all sorts of violent acts” in the area of CHAZ.

There is also the risk that CHAZ may attempt to expand.

CHAZ is also reportedly relying on its own internal, informal security force of armed participants to enforce rules. Its list of demands include that authorities abolish the police, and provide free health care and free college education to all.