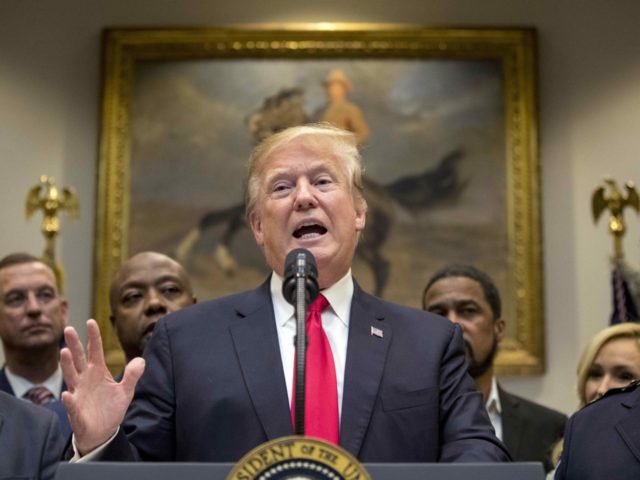 Charlie Kirk, founder and head of Turning Point USA, told Breitbart News Editor-in-Chief Alex Marlow on Monday that policies included within the First Step Act (FSA) have been “proven to work” in Texas.

As a guest on SiriusXM’s Breitbart News Today, Kirk responded to critiques of the FSA from Sen. Tom Cotton (R-AR) published in USA Today editorial.

“I love Tom Cotton,” said Kirk. “I think he’s terrific on a lot of issues, and I just saw a lot of similar tactics that we critique the left on on how they’re approaching this bill. For example, I read Tom Cotton’s piece, and it’s filled with pure demagoguery in attacking this bill called the First Step Act.”

Kirk continued, “There’s a prison reform bill that’s hopefully passing through Congress. The House passed it a couple of months ago, and now in this lame duck session the president is trying to get a legislative win before the new Congress is installed. The Senate would have to pass it and Mitch McConnell is being very hesitant. In fact he said it’s probably unlikely that it would come to a vote.”

Kirk added, “The demagoguery that Tom Cotton is putting forth in critiquing this bill really frustrated me, because I looked at the actual text of the bill and the studies from some conservative-libertarian think tanks. For example, Tom Cotton said it’s going to be harder to deport illegal aliens which is something I care a lot about … and there’s been no evidence to show that. I can’t figure out where he came up with that.”

Kirk went on, “Tom Cotton and his allies say, ‘Anyone who is supporting this, you’re also aligning yourself with Van Jones.’ I’m not fan of Van Jones, but that’s a horrible argument; not to support something just because Van Jones supports it.”

Marlow concurred in rejecting guilt-by-association arguments against the FSA. “[It is] the same thing as, [saying], ‘You shouldn’t like the president because David Duke endorsed him.’”

Kirk remarked, “It’s not sentencing reform. It’s not even criminal justice reform. It’s prison reform. Those are three different categories. … In essence, we have an exploding prison population of what some would call the wrong types of prisoners. So we focus a lot on non-violent prisoners and because of mandatory minimums and other laws, we have a heavy focus on people that didn’t commit non-violent crimes that are serving a lot longer in prison than those that was actually committed violent atrocities.”

Kirk stated, “For example, the average prison time for a rapist in America is eight to ten years, where you have some of these non-violent drug dealers that are in prison for 30, 40, or 50 years.”

Kirk assessed, “We have to admit that at some time some of these prisoners will re-enter society. Studies  and data show they have an extremely high likelihood of committing another crime and going back into the prison population if there aren’t some measures — that have been proven to work, by the way, in red states — to allow these prisoners to re-enter society.”

Kirk continued, “For example, Texas — that’s not exactly Connecticut or Massachusetts — passed their equivalent of the First Step Act under Governor Rick Perry, and they saw recidivism rates go down, they saw prisoners re-enter the workplace population, and this bill is almost a direct carbon copy of what worked in Texas.”

Kirk added, “It also worked in some other states in the South. I don’t want to misspeak, but I believe Louisiana or Georgia did something similar. I know Texas has been the blueprint.”

Kirk noted the FSA’s proposal to do away with mandates for convicted felons to identify themselves as such via job applications.

“[The FSA has] a provision to get rid of the box, and that is, essentially, that a felon has to check a box when they go and apply for a job,” noted Kirk. “Now, the Senate is debating whether or not to put this in the Senate version bill, and there’s been data to show there’s some good and some bad about it.”

Kirk explained, “Part of the bill would provide some funding to a lot job training for the last ten percent of a prison sentence for some of the prisons to actually get some form of applicative job training to when they re-enter society they have some form of a skill so they can find some job.”

Kirk continued, “The other part [of the bill] is actually parole reform, which incentivizes parole officers — and this worked in Texas, to actually work with former prisoners to find jobs and say, ‘This is something you should do, and it actually is a forward direction to find work.’”

Kirk claimed, “Studies show that in Texas, when they did appropriate this money, it had a massive impact on actually [improving] prisoners’ re-entry into society.”

Kirk spoke of the status quo of what he described of excessive sentencing of felons convicted of non-violent crimes.

“We do have to admit, something has to be done about this prison population,” declared Kirk. “It is actually a huge burden on taxpayers. We spend tens of billions of dollars on prisons every single year, and arguably hundreds of billions of dollars on societal and cultural costs, whether it be broken families or broken homes. There is no good argument to be made that the prison system is working as it should, right now.”

Kirk said, “This is not a get-out-of-jail-free or jailbreak bill. It does address sentencing reform. It does have some reforms on the parole side and allows re-entry to be more seamless, again, basing on red state reforms. … This is not a prison reform bill based on California or New York where people would maybe say, ‘Oh my goodness.’”

Kirk added, “It was [based] on the tough-on-crime state of Texas that Rick Perry supported. This is not a jailbreak bill. … It doesn’t allow violent criminals the capacity to get out quicker. I think if a non-violent offender has been serving 20 years for drug possession or a drug-dealing charge, I think they should be able get another chance to re-enter society. People may disagree with that, but I think there have been a lot of problems with how we have overemphasized people that have distributed certain forms of drugs over the last 20 or 30 years and the difficulty for them to be able to re-enter society.”