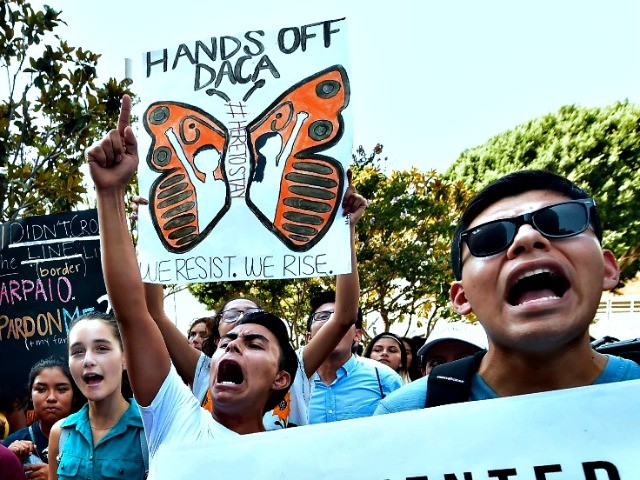 U.S. Chamber of Commerce executives are urging the split Republican-Democrat Congress and President Trump to end the government shutdown by giving amnesty to more than three million illegal aliens.

In a letter to Congress, Chamber of Commerce Vice President Neil Bradley writes that Republicans and Democrats must come together to grant amnesty to about 3.5 million illegal aliens enrolled and eligible for President Obama’s Deferred Action for Childhood Arrivals (DACA) program.

We urge members of Congress and the administration to expeditiously complete legislation to re-open the federal government and seize the opportunity to both improve border security and provide protection for Dreamers and long-term TPS beneficiaries. [Emphasis added]

The Chamber of Commerce executive claims the DACA amnesty is necessary for the “long-term health” of the American economy.

“The Chamber supports a deal that combines increasing border security with protection and legal status for Dreamers and long-term beneficiaries of the TPS program,” Bradley continues. “These are important policy objectives that would improve the near-term and long-term health of our economy while also demonstrating that it is indeed possible for policymakers to make progress on a politically fraught issue.”

Corporate interests and the big business lobby have the most to gain from granting an amensty to DACA illegal aliens, as legalizing millions of low-skilled foreign workers would drag down wages for Americans, drive up profit margins for corporations, and leave U.S. taxpayers with the costs.

A DACA amnesty would put more U.S.-born children of illegal aliens — commonly known as “anchor babies” — on federal welfare, as Breitbart News reported, while American taxpayers would be left with a $26 billion bill.

Additionally, about one in five DACA illegal aliens, after an amnesty, would end up on food stamps, while at least one in seven would go on Medicaid.

Any plan to give amnesty to DACA illegal aliens that does not also include provisions to halve legal immigration levels would give amnestied illegal aliens the opportunity to bring an unlimited number of foreign relatives to the country through the process known as “chain migration.”

The chain migration inflow from a DACA amnesty has the potential to reach nine million foreign nationals arriving in the country, as every two newly naturalized citizens bring about seven foreign relatives to the U.S. with them.

Despite major opposition from Trump’s base of supporters to for an amnesty-for-wall funding deal, the plan has been touted in White House discussions, as it is favored by the billionaire donor class.