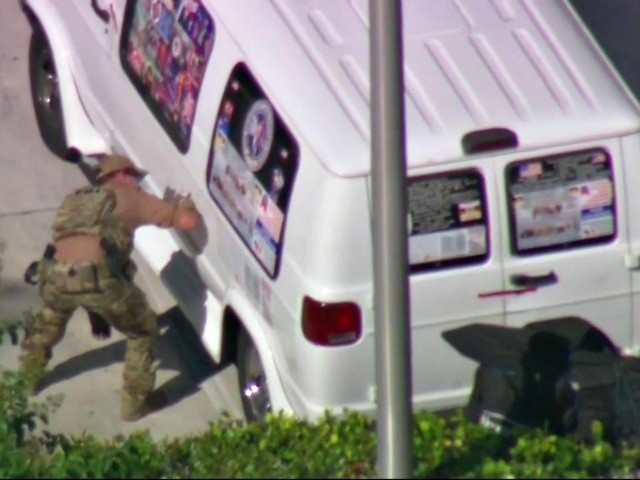 A closer look at the stickers that are on the van at the scene in Plantation, Florida. pic.twitter.com/Qml9tmEKMy

One Twitter user quickly shared photos that were taken of the van as it traveled down the highway in April.

@CBSMiami I have some pictures of this van I saw him at a stoplight one day and thought is was very strange. pic.twitter.com/VWUwznJK8k

The van, as you can see in the photos above, contained a variety of disturbing, confusing, and unorganized graphics.

One particular graphic on the van’s window features a soccer team with the words “Top Youth Soccer Recruits For Trump.”

An individual with the name Cesar Sayoc appears to have played for the UNC-Charlotte men’s soccer team in 1983.

A photo of Sayoc and four other individuals is plastered on the side of the van with an emblem that reads “AMERICAN TOP TEAM, South Florida | North Carolina”

A handful of graphics spread across the van showed prominent left-wing politicians and activists such as Barack Obama, Hillary Clinton, and Michael Moore in the crosshairs of a firearm.

@realDonaldTrump Quite the montage to our President and his feelings about the Media, Democrats and every other group the President has demonized… Oh and this was the accused bombers Ceasar Sayoc van that the FBI impounded… pic.twitter.com/HL5ehLmyTW

Graphics of anti-Obama memes and conservative musicians also filled the windows of the mysterious van.

One of the images featured on Sayoc’s van:

The meme that Cesar Sayoc had on his van is like a run-down of things every Republican uncle brought up at Thanksgiving pic.twitter.com/dHJebYCfCf

It was reported on Friday that Sayoc was making bombs while living inside of the van, that was confiscated by the FBI.

Sayoc has a wild history with Florida police that began in 1991 when he was arrested for grand theft in Broward County.

He was arrested less than a year later for petty larceny.

Sayoc’s arrest history over the course of the last two decades includes theft, battery, fraud, possession of controlled substances, and tampering with evidence.