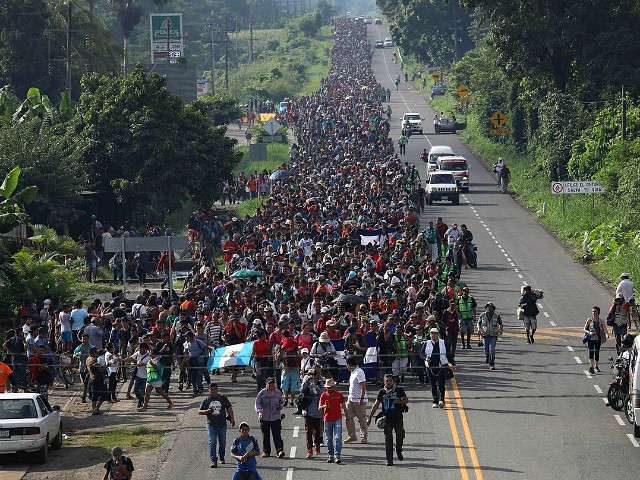 CBS Evening News on Tuesday evening revealed that most of the Central American migrants in the caravan are feeling poverty and not eligible for asylum or refugee status in the United States.

The news program was one of the first mainstream media broadcasts to explicitly note that migrants cannot get asylum or refugee status to get jobs in the United States nearly a week after Breitbart News noted that nearly every migrant interviewed by various media outlets–including the Washington Post, the New York Times, NBC News, and the Associated Press–revealed that they were traveling to America to seek better economic opportunities.

The CBS Evening News broadcast reported that the “mass exodus organized by activists in Honduras is believed to be the largest migrant caravan on record, an estimated 7,200 people, five times the size of the last one in April.”

Correspondent Adriana Diaz added: “Most tell us they are fleeing extreme poverty, but that’s not a condition for asylum or refugee status in the U.S.”

Most migrants traveling in the caravan tell CBS News they’re fleeing extreme poverty, but that’s not a condition for asylum or refugee status in the U.S., @adrianasdiaz reports https://t.co/y8PptV4yw8 pic.twitter.com/ZdVG1qkube

On CNN on Tuesday afternoon, correspondent Bill Weir interviewed a migrant who told him bluntly that “we are workers.” Weir interviewed another migrant and found out he was a former taxi driver who was leaving behind his children “because there’s no job” in Honduras.

NBC News also recently interviewed a migrant who the outlet revealed was hoping “to reach the U.S. and find work to send money back home.”

President Donald Trump has vowed to cut off foreign aid to Honduras, Guatemala, and El Salvador if they do not stop caravans from traveling to the United States. At a Wednesday evening Wisconsin rally, Trump again said pro-amnesty Democrats and activist judges are preventing his administration “from returning illegal aliens back home to Central America and other parts of the world.” At a Monday Texas rally, Trump said the migrant caravan “is an assault on our country.”

Last week on CNN, former Pennsylvania Senator Rick Santorum pointed out that Trump’s America-first message on economics and immigration is resonating with blue-collar workers of all backgrounds.

Santorum said that he thinks “the fundamental misunderstanding the left has with the immigration issue is they see it as a race issue. And it’s not a race issue.”

“It’s not a race issue with the people who are listening to Donald Trump… it’s an economic issue,” he said. “They see immigration as low-wage workers coming into this country, depressing wages, taking jobs, and it affects disproportionally, and this is why the president talks about it, and actually thinks it’s a good thing from the standpoint of race, because it does disproportionally affect people of color.”

During the 2016 presidential campaign, Trump repeatedly emphasized that illegal immigration hurts Latinos and black Americans who are trying to move up the economic ladder.