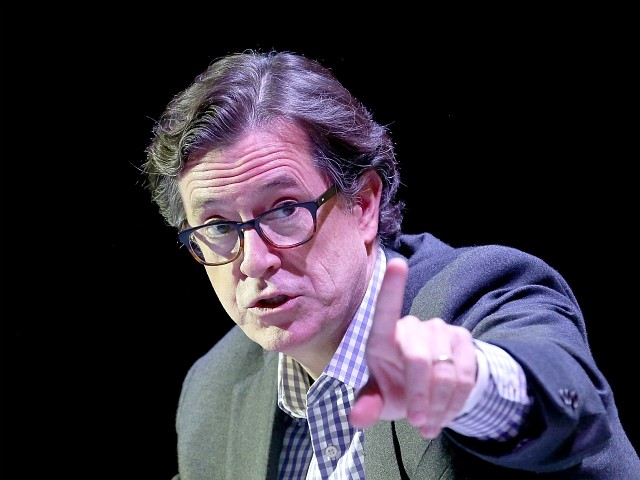 According to Colbert, the Trump administration’s policy of separating some relatives who’d illegal entered the country is the main reason why voters should remove him from office next month.

“I know that people vote on a lot of different issues, but now that we know that these children were stolen from their parents and cannot be returned because of the negligence of this administration, that is one of the things you’re voting on,” he continued. “You can’t say you don’t know.”

Colbert went on to assert his belief that the American people are not “evil” and therefore voting for Trump’s “inhumane behavior” would be an illogical choice.

“I don’t believe the American people are evil,” Colbert said. “Maybe 545 kids is too many to wrap our heads around. That’s eight school buses full of children. Maybe we feel too guilty to understand the magnitude of that crime and our responsibility.”

“We have two weeks to decide what kind of country this is gonna be,” he continued. “Either this inhumane behavior is gonna be punished by the voters, or just change the Statue of Liberty to read, ‘Give me your tired, your poor, and half-a-million dollars in unmarked bills if you want to see the kids again.’”

Colbert didn’t mention that separating minors from adults has been government policy since at least the Bush era. And it’s done primarily to prevent criminals and sex traffickers from posing as parents of the children to gain access to the United State.

Although Colbert and most other late-night comedians make no secret of their disdain for the Trump presidency, the rant is the latest example of the 56-year-old going into full campaign mode for the Democratic Party. Earlier this week, Colbert hosted a virtual fundraiser with vice presidential candidate Kamala Harris, where they discussed the “importance of this election, clean energy, and the plan to build back better.” Tickets for the event topped out at $100,000, with all proceeds going toward the Biden Victory Fund.

Meanwhile, a study released earlier this week by the Center for Media and Public Affairs at George Mason University found that Colbert and fellow comedian Jimmy Fallon targeted President Donald Trump in their jokes 97 percent of the time, compared with just three percent for Joe Biden. This is despite the fact that the 77-year-old is himself a ripe target for humor given his regular gaffes and brain freezes.