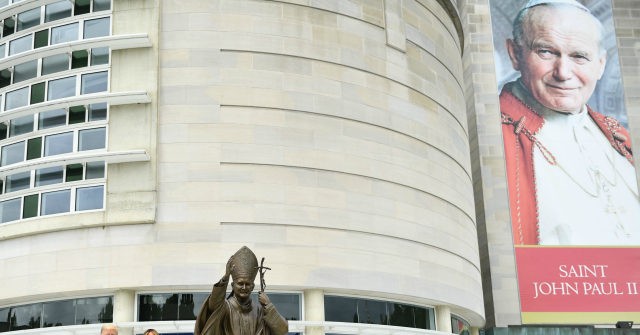 A number of prominent Catholics have reacted strongly to a statement by Washington, DC, Archbishop Wilton Gregory denouncing President Trump for visiting a shrine to Pope John Paul II.

“I find it baffling and reprehensible that any Catholic facility would allow itself to be so egregiously misused and manipulated in a fashion that violates our religious principles, which call us to defend the rights of all people even those with whom we might disagree,” the archbishop said in his statement Tuesday.

“Saint Pope John Paul II was an ardent defender of the rights and dignity of human beings,” Gregory said. “His legacy bears vivid witness to that truth. He certainly would not condone the use of tear gas and other deterrents to silence, scatter or intimidate them for a photo opportunity in front of a place of worship and peace.”

In a column titled “Baffling and Reprehensible,” Catholic author and journalist Phil Lawler enumerated seven problems underlying the archbishop’s statement, including its blatant partisanship and divisiveness.

The archbishop published his “inflammatory statement” without bothering to check the facts, Lawler observes, noting that the president’s visit to the shrine had no connection with the demonstrations but had been planned well ahead to coincide with the release of an executive order on international religious freedom.

Lawler also notes that Archbishop Gregory has “given over the pulpit of his cathedral” to Speaker Nancy Pelosi, an ardent defender of abortion on demand, suggesting a “hypocritical” double standard.

It is strange that Archbishop Gregory “blithely overlooks the most evident display of racial disparity on our nation: the systematic extermination of African-Americans in the womb, aided and abetted by the liberal Catholic politicians who welcomed the archbishop’s latest petulant outburst,” he said.

Others pointed out Gregory’s further lack of fact-checking, evidenced in his uncritical repetition of the mainstream media lie that tear gas had been used to clear out “peaceful protesters.”

Edward N. Peters, a well-known Catholic canon lawyer and professor at Sacred Heart Seminary of the Archdiocese of Detroit, tweeted that Gregory’s condemnation is “devoid of any sense of Christian sentiment.”

Brian Burch, the president of CatholicVote, said that Mr. Trump’s visit to the shrine and executive order on religious freedom ought to be “celebrated” rather than condemned.

“It is regrettable that the Archbishop of Washington chose this occasion to engage in a partisan attack on the President, especially when the country is in desperate need of healing and unity,” Burch said in a statement.

“Millions of Catholics in the United States, including many within the Archbishop’s own flock, are grateful for today’s Executive Order,” Burch observes, while the archbishop’s “unfortunate partisan attack needlessly politicizes this important issue, and distracts from the plight of vulnerable religious minorities around the world.”

The former papal nuncio to Washington, Archbishop Carlo Maria Viganò, went so far as to call Archbishop Gregory a “false shepherd” for his unjust reproach of the John Paul II National Shrine for allowing President Trump to visit.

“Unfortunately, the Catholic Church is led by many false pastors,” stated Viganò in a June 3 letter to the Catholic faithful of the Archdiocese of Washington.

“Over the past twenty years, your [Archdiocese] of Washington, in particular and now for the third time, has been and continues to be deeply afflicted and wounded by false shepherds whose way of life is full of lies, deceits, lust and corruption,” he said.

Other Christian leaders have weighed in on the matter as well.

Rev. Eugene F. Rivers, director of the William J. Seymour Institute for Black Church and Policy Studies in Boston and a prominent leader of the black Christian community, defended the president’s visit to the shrine.

“Because the president’s visit had been prearranged and was to focus on the one issue that has transcended partisanship in recent years, this was a very difficult situation,” Rev. Rivers told Catholic News Agency (CNA).

“I don’t see how a shrine or other house of worship can turn down a visit by anyone who wants to pay their respects or pray there – let alone the president,” Rivers said. “Those who call the president a sinner should remember that Jesus regularly caused scandal by eating and welcoming those who were seen as unpopular or inappropriate during his lifetime.”

“I think Jesus welcomes anyone – including Trump,” he said.