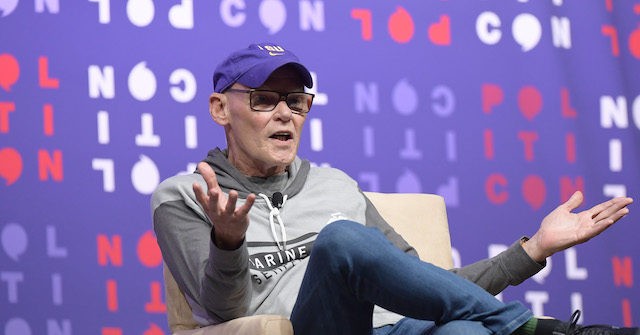 Carville said Ocasio-Cortez and other Democrats who are complaining should “do the math” because Democrats did not have 60 votes in the Senate to move legislation alone.

Pres. Biden & Senate Dems should take a step back and ask themselves if playing patty-cake w GOP Senators is really worth the dismantling of people’s voting rights, setting the planet on fire, allowing massive corporations and the wealthy to not pay their fair share of taxes, etc

Guest-host John Berman said, “Alexandria Ocasio-Cortez in the House, and she is not alone, she said she’s sick of playing patty-cake with Republicans. Other senators say the same thing. When you hear that, ‘We don’t want to play patty-cake with the Republicans,’ what goes through your mind?”

Carville said, “What goes through my mind is a lot of the people that are criticizing live in cooked plus 40 districts. There’s no chance they will lose to a Republican. That’s not the case with Kyrsten Sinema, that’s not the case with Joe Manchin, that’s not the case with a lot of people. If we want to expand our margins, we have to do it somewhere else other than the Bronx. We will win that. These political people have to live in real life. Look, we had two encouraging elections. If you look at New Mexico, where we are supposed to be doing bad, we ran ahead of Biden. We had a tough candidate that talked about crime and how she would deal with it. In Virginia, we had a remarkably high turnout. We got a lot of good Democrats elected in Virginia and won some primaries. The news is encouraging. If we go off the deep end, the same is going to happen to us that happened to us in 2020. No one is playing patty-cakes here. I’m talking about we didn’t pick up near as many Senate seats as we hoped to, and we lost House seats.”

Berman said, “Are you suggesting that Alexandria Ocasio-Cortez and these other Democrats that are getting antsy, that they are out of touch?

Carville said, “I don’t know if they are out of touch. They need to sit down and do the math. We don’t have that many votes. We’re not playing patty-cake. We have a 50/50 Senate. It’s very difficult. There’s a filibuster. You need 60 votes. We have a four-vote margin in the House. I’m a political guy. I can count. If you want to change that, there’s a way that you can do it. That is, do what you can, build up the president’s approval rating, pick up three more Senate seats, pick up six or seven more House seats. Then a lot of the things that you are talking about, you are going to be able to do. But having a discussion when we have the thinnest of all majorities, I don’t see it happening. I’m sure they are nice people and well-meaning and very good progressive people and everything. Somebody has to get a calculator. We just don’t have the votes.”